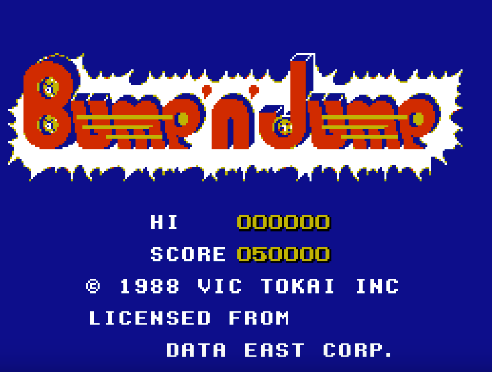 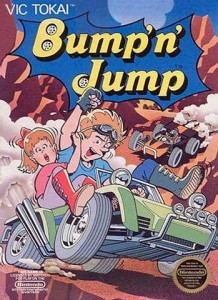 I’m not sure you would bump cars with your girlfriend hanging out the side, but hey, the 80s were a different time! 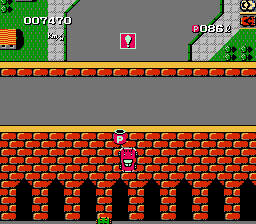 HOW IS THIS POSSIBLE!

Everyone knows the Burnout series, and if you don’t, I highly recommend it. It’s a racing game where the goal is to crash into as many of your opponents as possible. The more cars you destroy, the more points you get. Even if you’re not a fan of racing games, some element of Burnout should charm your heart with its wanton acts of destruction. The concept of Burnout – crashing into cars to destroy them – is nothing new, certainly; I remember crashing around back in the N64 days, with the awful port of Cruisin’ USA. Burnout certainly perfected the art of virtual crashing in the PS2 generation, though, a feat that has yet to be matched in this current-gen. Without having done any extra research, I can honestly say that Bump ‘N’ Jump is probably the closest to a spiritual predecessor that Burnout has on the NES: it’s relatively fast for eight-bit standards, it’s simple, arcadey fun that anyone can pick up and play, and you bash the crap out of your opponents.

There is a story here – save your girlfriend or something – but let’s face it: getting your girlfriend back is just the icing on the awesome cake of crashed cars in your wake. Drive around, get your speed up as fast as you can go, destroy as many cars as you can to rack up the points, and jump over obstacles, like bridges or long stretches of water. Lose any one of those elements and the game would be less than it is, but the combination of all of them is wonderful. Beware: the cars will do all they can to make you crash into the side of the stage. There are different styles of cars, as well, but only the tank (for obvious reasons) is immovable. Avoid him and the random blocks of green and red on the road, and you will conquer this game.

Well, conquer is a strong word, perhaps. This game is pretty bumpin’ hard. You only get three lives, no continues. There’s a somewhat complicated password you can input using both NES controllers that will allow you to continue from where you last left off, but I didn’t have the opportunity to try it out. Besides having no continues, the third level’s roads grow more narrow from time to time, allowing the dad-blasted CPU to bump you into oblivion. It only gets harder from there, but considering it’s a fairly short port of an arcade game, the difficulty is welcome.

After smothering my face in two craptacular Bugs Bunny games, it’s a warm and welcome respite to play something as simple and fun as Bump ‘N’ Jump. Since I really have nothing else to say about this game, I’m gonna “get real” for a moment, if I may: I’m currently on a cross-country trip around America for reasons you can find here, BUT that doesn’t mean I’m going to stop doing these reviews. It may mean, however, that they won’t be as funny and fancy-free as before (assuming that you find them good, of course). Basically, when I write out of my comfort zone, I don’t write as well. Since these reviews are hastily thrown together as it is, that means the reviews in the next two months may be chaotic and messy and crazy. But hey, that’s life. In the meantime, play Bump ‘N’ Jump because it may lower your blood pressure.