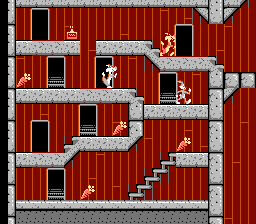 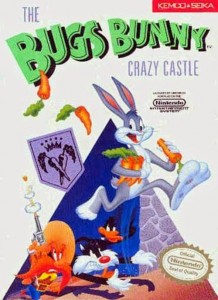 You see how the Seal of Quality is tilted, like it’s trying to run away? It’s a sign. 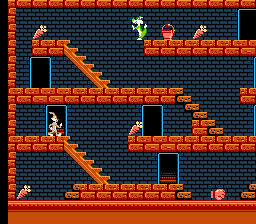 Is Sylvester sick? Why is he green?

Just so you know, when you turn on the game, the title card states that this isn’t just Bugs Bunny’s Crazy Castle. This is The Bugs Bunny’s Crazy Castle, just so you know Bugs ain’t frontin’. Apparently, there are a lot of Bugs imitators out there running around, setting up their own crazy castles made of sand. Rest assured, Bugs has built his castle out of rock and it’s not going anywhere. From what I understand, in 1989, Bugs knew his 50th Birthday Blowout would be fast approaching in two years, and he wanted to build a castle where his friends could throw a party for him because he’s just that vain. The resulting castle is a nightmare, and though it still stands within the confines of a gray NES catridge, it should be avoided at all costs.

I wish more NES games came with warning labels: “Warning! This game will bore you to tears, when it’s not sucking the life out of you with its cheapness!” Yes, you play as Bugs Bunny, and you traverse through sixty levels of his castle in an attempt to resuce all of his carrots. Various Looney Tunes thugs show up along the way (Wile E., Yosemite, Sylvester, etc) and run around maniacally because they can. If you touch them, you die. No problem, you say? Just jump over them, you say? Hah! The game features no such thing as a jump button, and as far as I can tell, it’s for one reason only: if Bugs could jump, there would be no challenge to the game. You could jump over every enemy in your mad quest to get the carrots and call it good. Something’s wrong with your game if you have to take a normal feature of any NES action game – like jumping – and take it away in order to add so-called depth.

The level layouts are abominable, especially as you progress. Go up stairs, collect a carrot, go down stairs, go across the screen, collect a carrot. Oh! Watch out for Sylvester, run away! Go back up stairs, wait until Sylvester follows you up, then jump off the side and go back to the other side of the level. There, now that you’ve read that, you don’t need to play the game. Simple as pie. The later levels are even worse because, instead of two enemies, you’ll have four or five coming after you. The levels don’t get bigger to accommodate for the extra enemies, either, they stay about the same size. It’s true, the game gives you items like bank safes and crates to drop on the heads of passing enemies, but it’s rare for you to actually land them.

Two things that disturb me a little bit about Crazy Castle: a lot of people have fond memories of this game. If you go onto GameFAQS, there are no user reviews that score this game less than a 6, and in fact, many give the game a score as high as 9. If they were to play the game today, I’d hope they would smash their rose-colored lenses on the ground, rip their clothes, and wail. Second, the Crazy Castle series continued on Game Boy, Game Boy Color, and Game Boy Advance, to the extent that there are actually four more Crazy Castle games. Four! Does anyone really want to collect thousands of carrots and avoid Yosemite Sam through hundreds of levels? Ugh, it disturbs the soul to think that these games were profitable. There’s absolutely no substance to them whatsoever.