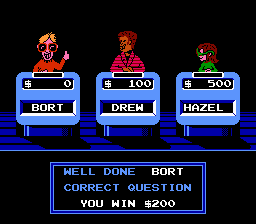 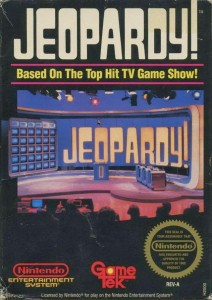 Where’s Trebek? We have a score to settle… 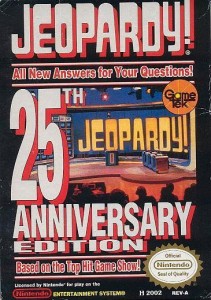 TREBEK! I know you’re hiding behind that podium! 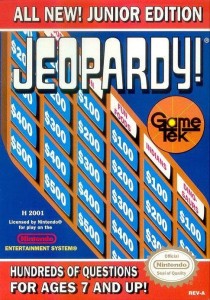 Cowering behind children, eh Trebek? You make me sick… 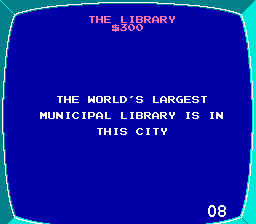 Do you want to play Jeopardy until your eyes bleed and your brain begins to ooze out your ears? I know I didn’t, but thanks to the power that comes with playing Nintendo, I was forced to! Each of these three Jeopardy! games are constructed exactly the same. Have you ever watched an episode of “Jeopardy” in your life? If so, then you know how to play these games (if not, I’m going to venture that you’re a communist who loathes the idea of personal gain and knowledge not used for the common good – a “hater,” in other words). These games are a little over twenty years old and the questions reveal as much. If you weren’t born in the 70s or early 80s and have an extensive pop culture knowledge, I’d wager that the questions will frustrate your supple, youthful brain. That being said, if you have a multi-tap and two extra controllers, get some three-player action going. Silly game-show games like this are always great with lots of people mocking your abilities to answer properly. If you’re a loner, though, there’s still plenty to mock, like the downright gruesome-looking contestants. These people look like they were half-cooked, failed experiments from some cloning lab in El Centro, California. None of that matters when you’re in the lead, like a boss, but they are distracting at first. There are almost no differences between the three games, which is great if you like the format. Jeopardy! 25thAnniversary is essentially an upgrade to the first Jeopardy! with new questions, while Jeopardy! Jr is aimed at the younger set (some day they should really make a Jeopardy Sr!and just have octogenarians answering questions about ragtime and vaudeville). If you’re really into Jeopardy! then you may already have these games. If you’re not, then I recommend putting down the computer and running as far away from this review as possible. I’ll wait.
Jeopardy!: C+
25th Anniversary Edition: C+
Junior Edition: C-
The following two tabs change content below.