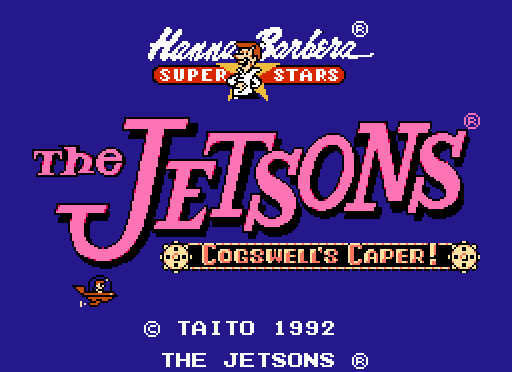 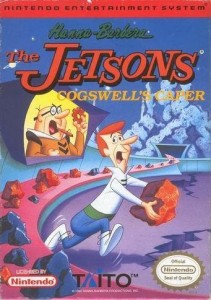 “You see this cog, Jetson? I want it put back on my grandfather clock before sundown! And stop playing with company property!” 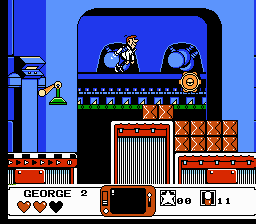 The very definition of “derp”

I’ve never liked “The Jetsons” and I don’t plan on starting now in my roaring twenties (it’s like ‘The Flintstones’ but in space and with a sassy robot house maid). However, I like to think I give each and every game a fair shake, regardless of any previous bias toward source material. Cogswell’s Caper, however, needs to be brought downtown and shown what it’s like. For such a potentially fun and simplistic platformer, Taito felt the need to up the frustration and difficulty by having the main character, George Jetson, jump like he has painful hemorrhoids. I can’t tell you how many times I died, due to his inability to properly jump away from enemies. In fact, if it wasn’t for his lack of jumping skills, this game would probably be a pie walk (like a cake walk, but with less frosting). It heavily draws from Capcom’s Disney platformers, especially Chip and Dale’s Rescue Rangers. Your weapons are blocks you pick up off the ground and enemies are sparsely spread out throughout the level. Unlike Chip and Dale, who are nimble crime-fighting rodents, George Jetson is a bumbling oaf who should not be embarking on any adventures outside of domestic squabbles with his wife, let alone one where he has to save an entire planet. I felt queasy playing as him and Taito’s ridiculous animations didn’t add to my enjoyment of the game (the worst is when he dies and squiggles down the screen like an eel). Perhaps there’s some gold to be found within this scum-encrusted Caper, but I didn’t feel like searching for it.
D+
The following two tabs change content below.