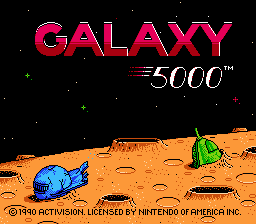 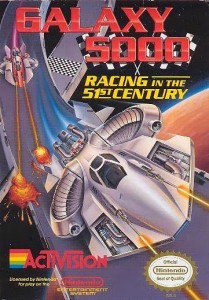 You’re the best… AROUND! NOTHING’S EVER GONNA KEEP YOU DOWN!

Galaxy, Galaga, Galactic, they all come out the same color in the end. Galaxy 5000 is a intergalactic racing game about dreams and what you need to accomplish and achieve said dreams. A big honking grey spacecraft, you say? Only if you want your dreams to come true. Some foreboding expensive weapon add-on named “The Crusher,” you say? Yeah, this’ll help, son, but don’t get too cocky: the other racers probably have similar weapon upgrades. Each series of races is held on different planets in the solar system. It starts off with Mercury, then moves to Venus, then to Pluto (woops) with each series of races getting progressively more difficult, and as a result, interesting. I wasn’t really impressed with the game until it moved to Venus and actually started giving birth to challenge. Each planet has four races, with each race consisting of the same track layout, but different obstacles set into play. At first, there are little blockades to maneuver around, but eventually turrets get put up, accelerators, bouncy balls, and finally, a Chuck E Cheese playland (actual playland to be constructed in the 52nd century). The whole galaxy is against you achieving your dream of becoming the world’s first Intergalactic Racer Extraordinaire. Luckily, your spacecraft controls like a dream, at least with the “Alpha” controls (I didn’t test the “Beta” controls, due to the “Alpha” set being so darn easy/dreamy). It’s not difficult to win here and there, but it is harder to stay ahead in some of the later races. As far as I could tell, you never really die or get disqualified, unless you refuse to repair your ship after every race. Take care of your ship! She’s your pride and joy and the one-way ticket out of your scuzzy studio apartment on Neptune! Yeah, Galaxy 5000 may not look or sound pretty, but it’s got replay in spades. Literal spades!
B+
The following two tabs change content below.