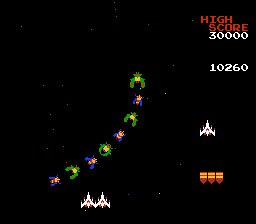 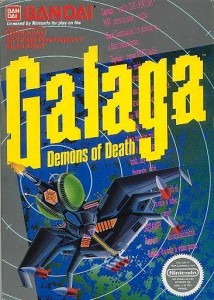 I didn’t even know Demons of Death was the subtitle for Galaga until I played the NES port. Oh Galaga, you still have much to teach us after all these years!

Nothing like some double-ship action to ruin some space bees plans for the evening.

From the opening credits where the title screen rises amidst a sea of twinkling colored pixels, to the sound effects which range from the space bugs dive bombing you, to the steady hum of your ship preparing for imminent battle before each stage begins, I friggin love Galaga like a fat kid loves cake. It’s the steady-as-she-goes gameplay that drew me in as a child. I loved the concept of ever-increasing waves of insect enemies and the ability to have your spaceship captured, only to recover it – and have it fight alongside of your current ship! – by destroying the enemy that took it. Like all arcade games from the early 80s, the emphasis was on how many points you could rack up during each play and how far you could get in the game. Question for my readers: what is the highest level you’ve ever gotten to in Galaga? My own personal best would have to be the upper teens-to-low-20s, but it’s been many years since I’ve reached such heights. There’s nothing like a simplistic, addictive game, particularly from the shooter genre, that you can return to time and time again, regardless of new consoles, innovations in gaming, what-have-you, and have it still be as fun as it was when you were a kid. For me, Galaga is one of the few games that can still do this on the NES, I wouldn’t rank it above any of the bonafide, NES-born classics like Castlevania and Mega Man, but it holds a special place in my heart for its reliability and fun. Galaga… will you marry me?
A+
The following two tabs change content below.