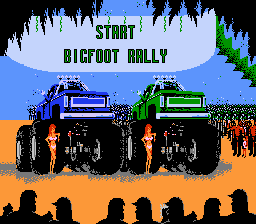 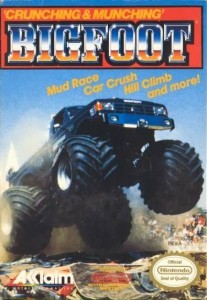 Crunching and munching all your hard-earned allowance money. 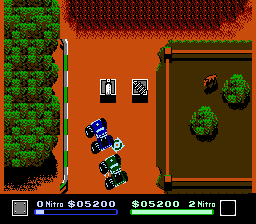 Are you ready for poor game design, crap controls, and an overall terrible game? Start your engines!

When I first saw this game on the list of games starting with “B,” I chuckled inside. How can they make a game revolving around the creature Bigfoot? Are you some wannabe explorer trying to hunt the elusive creature? Do you take random blurry pictures of creatures that may or may not be tall monkey/human hybrids? Do you achieve your own special program on Fox? All my questions were for naught when I discovered that Bigfoot is actually a monster truck simulator that tries really hard to be as unplayable as possible.

You literally play a monster truck cruising his way across the US of A. For some reason, another Bigfoot truck by the name of “The Crowler” is ready to take you down to crunch town. Amidst my boredom, I tried to think up a reason/amusing story as to why two large monster trucks would have it in for each other as they drive across America; surely there’s a reality show idea waiting to happen! I, however, could think of nothing to amuse myself. Logic and reason do not need to be in a Nintendo game for it to be entertaining, but I haven’t played a game of such poor quality in a long time. I need more reasons to hate it than I already do.

I haven’t mentioned the gameplay because I’m pretty sure Acclaim aka LJN designed this bad boy to stop at stage 2. Forty bucks for a one-stage game, eh? DLC sounds pretty darn cheap with those kind of prices. The first level is frantic driving all over the place. You’re jumping over pits, collecting money, and trying to destroy the other truck. The controls make no sense: all I could decipher was that pressing up on the D pad makes you go, kind of. “B” makes you jump, but I think “A” just makes you freak out and swivel around for no reason. The first level is also a race, but it doesn’t matter if you beat Crowler as you simply move on to the next stage. You like car crushing? At a primal level, I think it could be quite entertaining, and in a video game, mildly amusing. But for whatever reason, the controls are unresponsive in this level. I challenge any one to pick up the controller at this stage and know what they’re doing. How hard could it be? A four-way directional pad, and two main buttons? And yet, push them all with all your might, and nothing happens. Unlike stage 1, however, if you do not finish the car crunch challenge, you are forced to repeat it.

Acclaim and LJN are the exact same company, so I’m not surprised when a crappy racer like this just oozes out of them, like some recreated human made out of stem cells. But why? Was big truck racing really that popular in the late Eighties, anymore than it was in the late Nineties? Is it really that hard to make a halfway decent racing game with monster trucks?