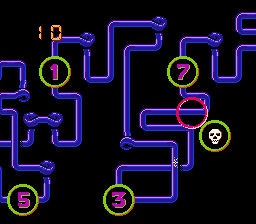 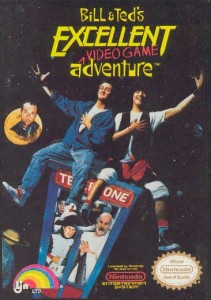 The phone-dialing simulator… from hell.

I know next to nothing about Bill, Ted, or the “excellent” adventures they went on. I’m pretty sure they’re retarded stoners who swept a generation of retarded stoners off of their feet. Well… maybe I won’t go that far. I’m sure the movies were funny at one point, but I’m not sure they’ve aged well, being as they are full of jargon like “radical” and “tubular” and such. But what is this game? Truthfully, I’m not sure it is a game because it can hardly be said to contain game play. It could be a demon disguised in a gray cartridge that, should you achieve some sort of satisfaction from playing, spews green bile at your face. Luckily, no one will ever feel like they’ve accomplished anything by playing this game, other than shortening their life by mere minutes.

Trust me, no one in their sane mind will play this game for more than a few minutes. Like so many NES games, you’re told what to do… but given no direction to complete your goal. In this game, your job is to rescue a bunch of historical characters, I think. But once you’re in the level, you have to use the NPCs for help. They will do one of three things: give you useless information, beat you up and take one of your precious coins, or throw you in jail. The levels are set up from a 3/4 isometric angle, which means you can’t really see what’s around you. The levels are also huge and nonsensical, so good luck trying to figure out where to go or giving much of a damn along the way. To give you an idea of the randomness contained within the game’s programming, I was making my Bill/Ted character jump across the screen for no reason. I landed in a field of rocks and grass and “found” four puddings. There was no actual pudding or food icon in the field: I just found the pudding sweet spot, I suppose.

Other gameplay “elements” encountered involved dialing numbers – in order to go back in time, of course – and guiding a phone booth across circuits with random circled number. You must get your booth all the way across the screen, and into the circle of the farthest number. Only then can you enter the actual level and proceed to hate the game even further. But after dialing numbers, shooting phone booths from number to number amidst wired circuitry, and jumping like a gay swan across a poorly conceived world where everyone is either a bully or a knight trying to steal your phone booth money, I grew weary of my endeavor and shut the game off. Like every other LJN game I’ve put more than five minutes into, it just isn’t worth it.

I know that, in many of these reviews, I make it sound like I’ll turn off any game within five minutes. This is entirely untrue. Only when a game as moronic, and yes, unplayable (my new favorite word, as of late) as this comes along, do I do what any normal Nintendo player would do: I set the controller down and close my emulator. What choice do I have? My brain was beginning to atrophy the longer the game was turned on, and quite frankly, I’d like to finish this quest before I’m senile. Anyways, no one needs this review because no one needs this game. I wouldn’t give Bill and Ted to cold-hearted murderers in prison, let alone my poor ten-year-old child in 1991. It’s a harsh, unforgiving world out there, and if you can spare someone a small amount of pain in their short, fragile lives, well…