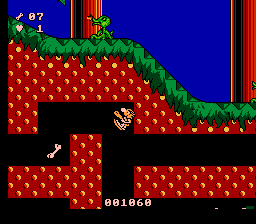 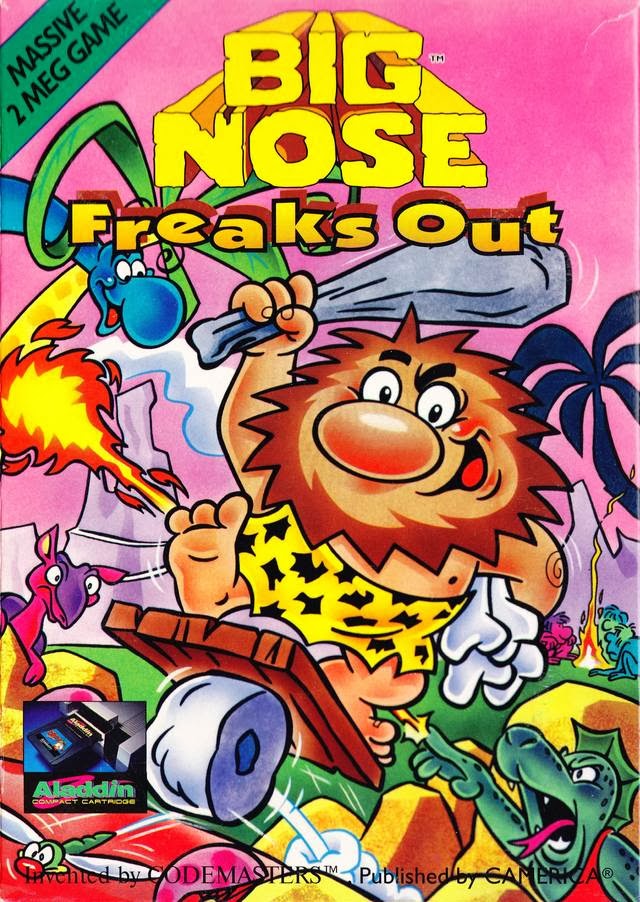 Big Nose is that rowdy uncle who only arrives at family gatherings after shooting animals and drinking heavily. 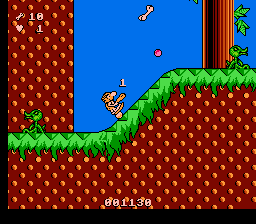 Caught between a hill and two kissing plants.

More like Dylan, the noble, intrepid, handsome Nintendo player freaks out. I’ve never really been much of a partier and hippies who were all about peace, love, and feeling “groovy,” have never jived well with me. Then again, this game isn’t about “me.” It’s about Big Nose and what happens to him when his bones – which represent currency in the Cretaceous, apparently – are stolen by a war-mongering dinosaur. I could have told Big Nose this was going to happen: when you wage war against all the dinosaurs, as he did in the last game, of course the last remaining one was going to come after all your treasure! That’s just COMMON SENSE. Anyways, hurtful words are exchanged, Big Nose is hit over the head, bones are stolen, and now, it’s up to him to destroy the rest of the creatures on his island.

This time, instead of crossing the island by foot (which is so 3,000,000 BC, BTW), you roll across the island on a stone wheel. At first, I was conflicted. Big Nose’s controls are a lot more slippery initially, but given some time, I think I prefer it to running around on foot. Alas, despite the convenience of said stone wheel the controls do like to destroy you at times by running you into enemies and not allowing you to jump as high as you think you should. Also, Big Nose often gets turned around simply by hitting walls, which can conjure up mild obscenities here and there. It’s not a bad gig, though, and if you keep your club straight and true, it’s hard to get hit.

His world is much more open-ended this time, as well. No longer do you just go in a straight line across each level with reckless bludgeoning abandon. The goal – should you desire to get farther in the game – is to collect a certain amount of bones hidden within the level. The more bones you collect, the more bonus items you may receive, such as extra lives or continues or powers. In some areas, the bones are hidden in insane places that you will only find through trial and error. It gives the game some longevity, which is appreciated, but truthfully, I can’t see anybody but the most die-hard Big Nose fans wanting to “collect them all.” Watch out for the mushrooms within each level: some of them breed extra bones to collect, while others can reverse your controls and cause epileptic seizures (in Freaky Forest level 2, hit the first mushroom you see).

Other gameplay elements remain the same as the first: collect the stones (I called them grapes last time, but they were colored purple for some reason – it’s Camerica’s fault, not mine!) to earn extra bashing and smashing powers. Otherwise, one-hit kill and you’re dead. The game seems a lot more forgiving this time, though, which is good because your rolling stone can get you into trouble if you’re not careful. Stones are placed more thoughtfully around the levels, and you’re never really in danger of being without them. None of the enemies are that challenging, but the levels can get confusing the farther you progress.

I have to give Camerica credit: this is a slight improvement on the first game. Since the first Big Nose was popular enough that it warranted a sequel, I’m surprised they decided to add any new gameplay elements when they could have just swapped some level palettes, added some different enemies, and called it a day. Is Big Nose’s freaking out entirely justified? I don’t think so. Surely, there’s plenty more bones out there to be had in such a vast prehistoric land; let the last dinosaur on earth have his day. But, from a more realistic, economic standpoint, having the word “freak” in the title probably sold a lot of copies to some children from the early ’90s. Big Nose, you’ve done it again.