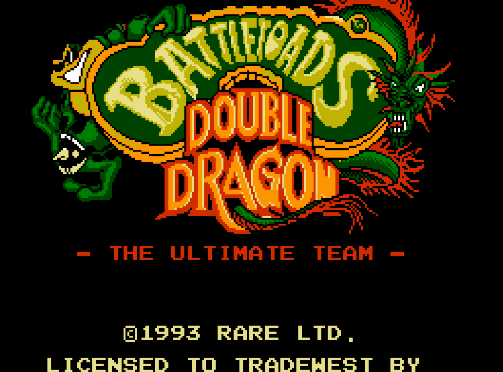 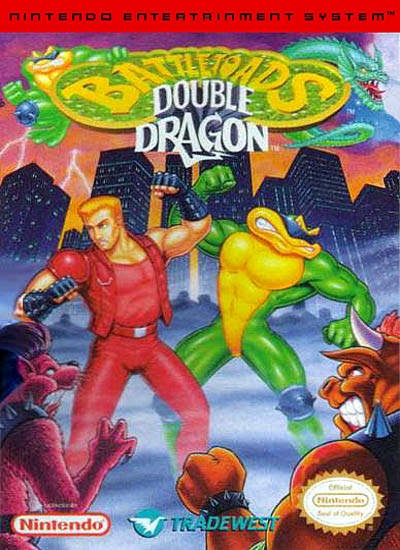 Even the cover bears great potential… 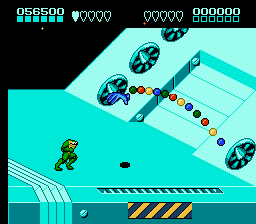 How is Battletoads & Double Dragon not a good idea? Two of the best brawlers for the NES team up in an epic showdown to see who can out beef cake the other?! Game on, bros! Unfortunately, the bulk of the game is a sub-par brawler that, without the presence of the ‘Toads and the Dragon, possesses little to no gaming value. Unlike the first Battletoads where two players strangely worked against each other, this game is only made fun with another person. Whereas Battletoads prided itself on variety within its thirteen levels, in B&DD, any variety feels forced and most of the gaming mechanics – rappelling down a long corridor – are recycled from the first game. Some outer-space shooting sequences in level 4 are particularly uninspired, boring, and hard – the three adjectives you don’t want assigned to a game.

The main issue I have with Battletoads & Double Dragon, besides its average-ness, is that it’s a Battletoads game with Double Dragon characters and enemies haphazardly placed inside. Besides the straight-up brawling segments, nowhere does this ever feel like a normal Double Dragon game. I understand that Rare developed the game and that their focus are the Toads, but c’mon: at least attempt to combine the two awesome at-the-time franchises in some relevant, interesting way.

Instead of making Battletoads & Double Dragon a cooperative effort against evil, Rare should have taken this opportunity to pit the two groups against each other. Billy and Jimmy could think the Toads are an invading alien force come to earth, and the Toads could mistakenly view the Dragon duo as working for the Dark Queen. In 1P mode, you switch off between the two groups, and in 2P mode, each person takes control of the different team.