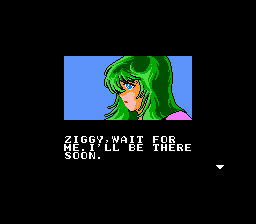 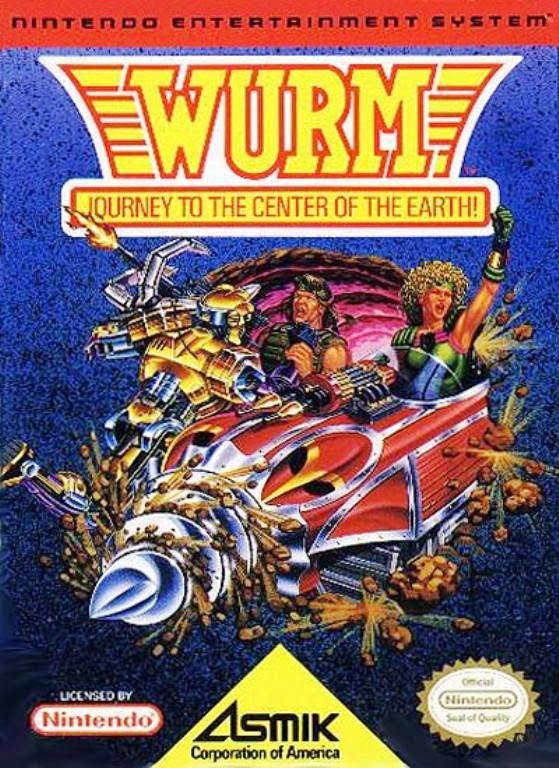 This cover’s all kinds of crazy. Much like the game itself!

“Ziggy… can’t hear you now. We had to pack his ears with gauze.“

Wurm is a genre sampler. It hands out bite-size portions of both horizontal and vertical shoot-em-ups, action/adventure, and a rudimentary first-person shooter, all wrapped together via deliciously ’80s anime cutscenes. It’s for the best that Wurm dabbles. None of the genre bits as they’re executed here would make for a good game by themselves. Divided as they are, the game succeeds by not lingering in one place for too long. 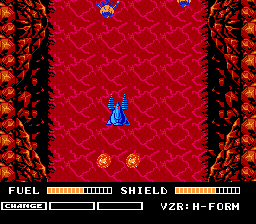 The drillbits look like pincers.
Wurm is composed of five acts, with four stages per act. The first stage is always a horizontal shooter where you control the WURM, a tank/plane hybrid with a drill on the front of the cockpit. The WURM has a three-way directional attack, but it’s not very powerful and there are no weapon upgrades; it’s best to just bypass enemies altogether if you can. You’re able to switch control from the tank to the plane, but not from the plane back to the tank. Since you’ll want to be in the plane at all times anyway, it doesn’t really matter. It’s easier to attack enemies from mid-air than on the ground, and while you’re in the plane, your shield will continuously regenerate; not so in the tank. Keep an eye out for your fuel gauge in both forms, as it’s constantly running down. The stage always ends abruptly by lurching the WURM to a stop. Then there’s a brief exposition-filled cutscene, and it’s on to the vertical-shooter portion. Here, your WURM is always in plane mode and you’re fighting upwards instead of right-wards, but other than those two elements, the vertical-shooter is the same as the horizontal shooter. 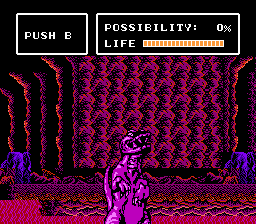 The possibility of this monster being frightening? Zero!
The “first-person shooter” section of Wurm isn’t an FPS as we think of the genre today, but I’m not sure how else to describe it. Your viewpoint is the cockpit of the WURM ship looking out onto a hilarious Roger Corman-esque monster. You can look right and left to avoid the monster’s attacks, but you can’t move forward or backward. Before you fight it, you have the option to switch between weapons and to talk to the WURM’s crew members about the monster. Talking to the crew may help you regain lost life or even inflict some damage on the monster, but it can also have the reverse effect and you won’t know which crew members are helpful until you choose to talk to them. The monster has a “possibility percentage” rather than a life bar. Instead of just attacking the monster outright, you’ll have to shoot his secondary attacks to increase the possibility percentage. Once the percentage reaches 100, shoot the monster once and he’ll explode. Out of all the stages in Wurm, these are the most successful. Finding the monster’s weak point can take some time and it’s not always clear what secondary attacks you’re supposed to shoot. Having the discussions with your crew potentially effect the outcome of the fight is such a cool feature, though, and the overall battle structure is one of the most distinct I’ve seen on the NES. 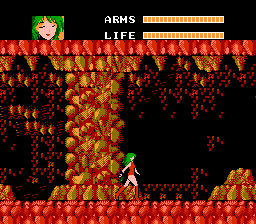 The main character looks like Time Gal!
Wurm wants to rush you through the action/adventure portion, and as a result, it’s the least interesting. You control Moby, the WURM’s captain, and you’re looking for people to rescue from previous WURM expeditions. Moby is armed with a gun (with limited ammo) and a high kick that does absolutely nothing. The enemies, both flying and ground, do an excellent job at avoiding Moby’s limited bullets, but they run into her with surprising ease. The stage layouts are haphazardly designed, and it’s a chore figuring out where you’re supposed to go. You know how holes are considered instant death in 99% of all video games? In Wurm, you need to venture down them to progress. Knowing this now will save you some grief. If the developers had given this portion a bit more breathing room – tighten the combat, make the areas interesting so that the player desires to explore them – it would have been more enjoyable. My advice: peruse an FAQ and get through these busted sections as quickly as possible.
Wurm might not be a game changer (be honest: had you heard of it prior to this review?) but I can honestly say I’ve never played an NES game that switched between genres so seamlessly. Of course, not all of them work as well as the first-person section, and the cutscenes between stages really help the game’s flow. Still, I’d rather indulge in a self-aware, risk-taker with some loose seams than a completely broken mess.
B
The following two tabs change content below.