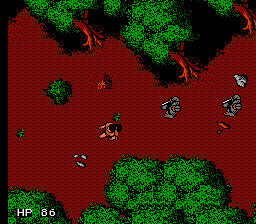 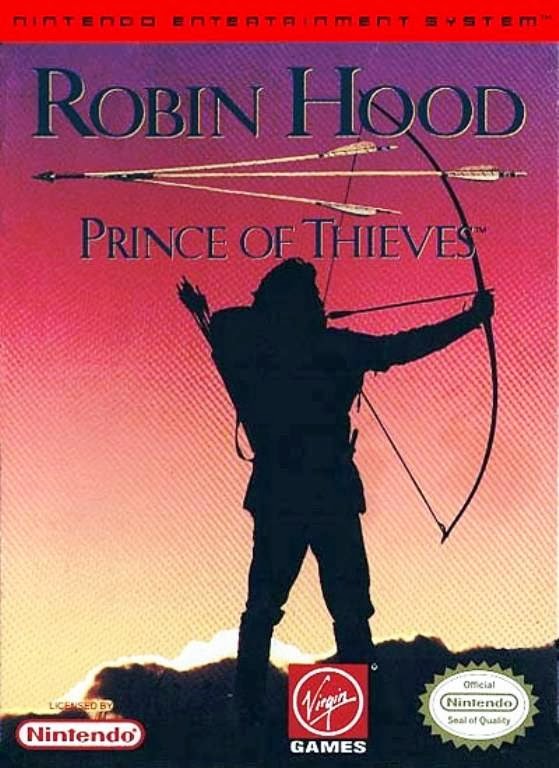 Don’t tell me… IT’S NOT WORTH DYING FOR! 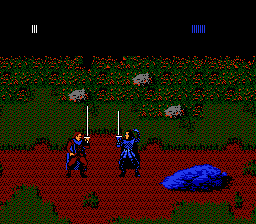 Have at thee, you merry prankster!

Much like Conan the Barbarian or Tarzan, Robin Hood has never been an interesting fictional character to me. He’s a great archer, robs from the rich and gives to the poor, has a band of merry men, and… what else? I’m not sure if Robin is suffering from a lack of personality or if I just don’t like whatever personality is assigned to him, but he bores me. He’s not charming, gritty, or amusing. He’s just there. Robin Hood: Prince of Thieves, based on the film of the same name, is as bland as its titular character, despite some interesting genre-blending. While I’ve played worse licensed games, I have yet to play a licensed game that tries to do so much with so little.
Robin Hood follows its source as well as any movie-based game. All the main story points from the movie are accounted for, as are interactions with major and minor characters. Each area is a blend of action and adventure, with minor RPG elements. In the third-person overhead view that encompasses the majority of the game, you can collect items you see on the ground and fight smaller enemies, like rodents. If you stab a guard or other enemy, you’ll be thrust into a side-scrolling duel mode. Avoid them if you can. The guards are ruthless, take cheap hits, and they have no set pattern to their sword swipes. Crouch down and attack when you think they won’t attack; otherwise, you’ll be flayed for sure. Occasionally, swarms of guards will attack you and your men. In these parts, the camera will zoom out until Robin, his followers, and the enemy all resemble ants. Skewer all the guards until they stop coming. Pressing ‘Start’ will bring up the main menu, which allows you to search an area for hidden items, take items in plain sight, and delve further into equipping Robin and his friends. In this latter section, you can replenish health, equip weapons and armor or other goods necessary to progressing. To its credit, Sculptured Software put a good deal of effort into Robin Hood’s creation. Not many licensed game developers can say the same.

Typical jerk guards being jerks.
I realize Robin Hood might sounds interesting to those of you who haven’t played it, and I don’t blame you. Save for the duels, all of the gameplay elements by themselves are executed well enough. Problem is, Sculptured Software has to employ said elements within the generic world of “Robin Hood: Prince of Thieves.” It’s a world of muddy greens and browns, ugly and devoid of personality. It’s not a world to linger in or casually explore, where every area has some interesting quirk or secret, like Zelda. It’s a world you want to leave as soon as possible and no amount of great gameplay could keep me there.