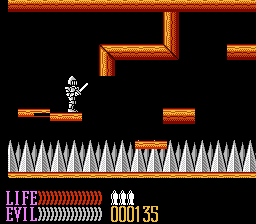 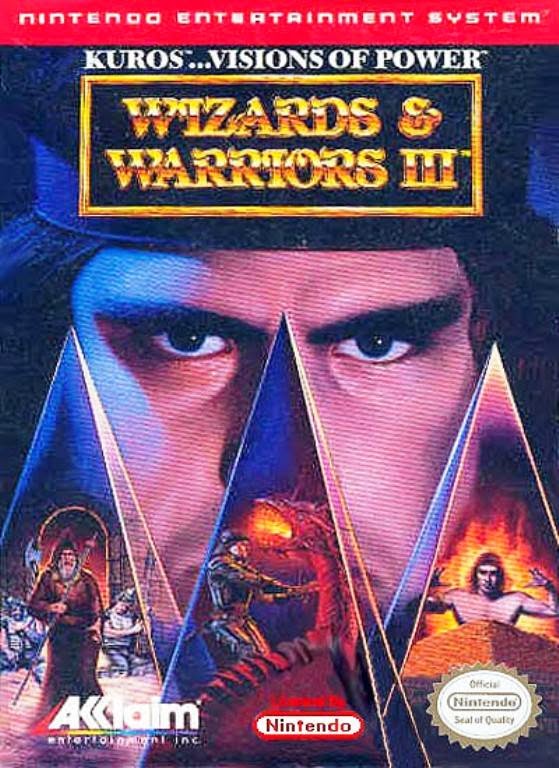 We’re calling out the big guns: Gandalf, Robin Hood, and the, uh… Prince of Persia. 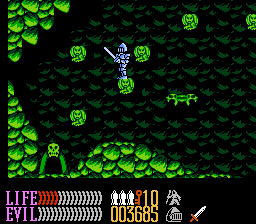 Surely those green gargoyles don’t enjoy being used as platforms.

Nah, I didn’t forget to review Wizards & Warriors II. Here it is.

One more cup of Kuros before you go. And what a cup! The final entry in the Wizards & Warriors trilogy is also the best. Rare wisely de-emphasizes combat – the series’ weakest feature – while encouraging exploration and adventure. The story: after Ironsword, Kuros lost his memories and knightly powers. Despite lacking his previous abilities, a sense of urgency draws him to the strange, vertically-minded city of Piedup. It is here where he begins his journey. In the beginning of the game, Kuros’ goal is to seek nine statues – three Thief, three Knight, and three Wizard – find the guilds where these statues belong, and take challenges which will test his thieving, knightly, and magical mettle respectively. After he has completed one of each challenge, he will have obtained thief attire, stronger knight armor, and wizard robes, each with their own distinct abilities (the Knight is balanced in strength and combat, the Thief is sneaky, and the Wizard has a staff that launches fire projectiles). The three areas of the game – Piedup, The Castle and The Dungeon – have denizens who will respond to his clothes in different ways. For example, Kuros will be welcomed as a knight in the Castle, but only as a thief in Piedup and only as a wizard in the Dungeon. Completing all nine challenges in the guilds will produce a stronger, more well-rounded Kuros than ever before, skilled in stealth, might, and magic. But his quest is not over. He’ll then need to rescue four princesses and their Crown Jewels before fighting Malkil, the final boss from Ironsword. Then, finally, Kuros can rest.
Because Wizards & Warriors III lacks the swarm of bombarding enemies that defined the previous two, there’s more incentive to explore the game’s three surprisingly vast areas. Like the previous two, secrets abound in invisible rooms. With the dearth of enemies, I felt freed to explore at my own pace, instead of being forced to move at all times for fear of being killed by kamikaze birds. The game’s challenge still lies in its combat (particularly with some of the bosses that protect the statues), but battles are less grueling with the different skills of each character. Not all gamers will appreciate Wizards & Warriors III more relaxed, refined structure, but as an older gamer who doesn’t always handle cheap hits with good nature and aplomb, I couldn’t appreciate it more.
A-
The following two tabs change content below.