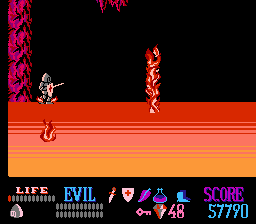 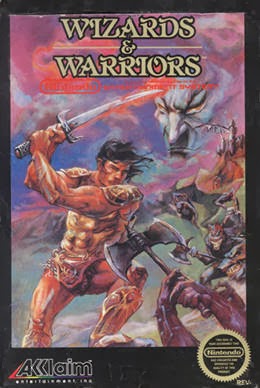 I tell you, my locks will not be tamed!

Kuros is hot-blooded, but there’s no need to check and see.

If you were a knight at the dawning of the age of Aquarius, you might act a little like Kuros, the star of Wizards and Warriors. He’s loopy, and he can’t hold a sword properly, but he still gets his share of knighting done. Kuros wanders through forests, ice and fire caves, more forests, and a large castle for the reward of half-naked princesses aplenty. The worlds he wanders are “non-linear,” which means, his journey isn’t a mere left-to-right affair. Each world requires precise jumps (lots of ’em!), an array of hidden items, keys of varying colors, and gobs of gems to conquer. A red, blue, and pink key are hidden throughout each world. Once collected, they open up treasure chests of the same color. The treasure chests give either gems, which bribe the knight at the end of each stage; or special items like “The Feather of Feather Fall,” which allows you to float gently down if you fall off a ledge. Each world takes a goodly amount of time to explore its depths and intricacies. Fear not: there’s no time limit, you have unlimited continues, and you restart right where you die every time. Wizards and Warriors was quite the generous game in 1987. Two complaints: enemies are numerous and belligerent, attacking you with every ounce of strength and hostility within their bones; and the level design feels sloppy and unrefined compared to Nintendo’s own non-linear adventure Metroid,released the year prior. Nevertheless, gathering treasure and saving ladies proves addicting enough to hold one’s attention throughout the adventure. You and Aquarius win this round, Kuros.
B
The following two tabs change content below.