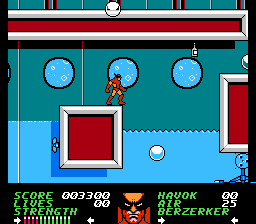 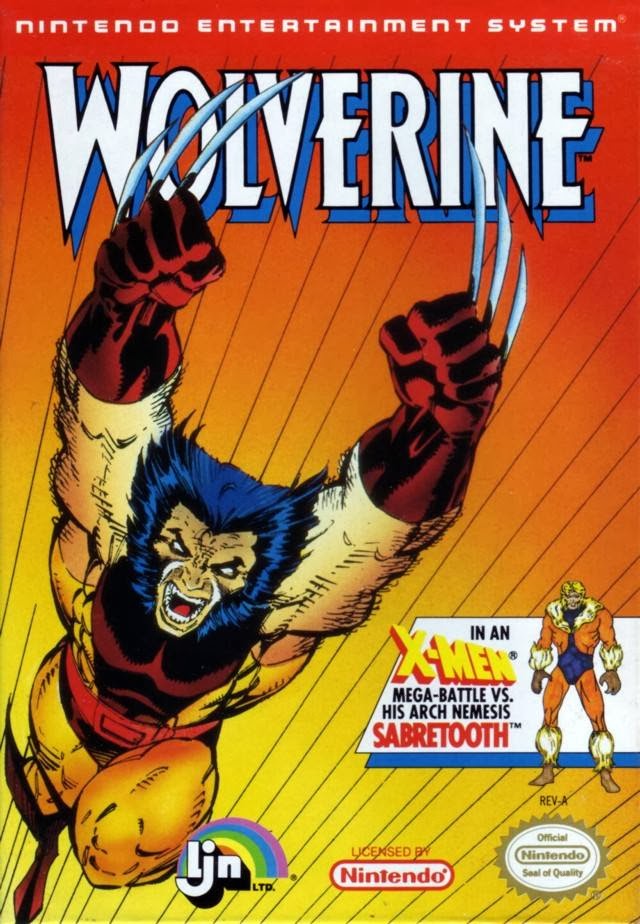 Sabretooth looks like a hairier adult version of Jonny Quest.

Your most fearsome foe.

Wolverine is a disgrace to the character it’s named after (I am aware ‘after’ is a preposition at the end of a sentence and, much like the makers of this game, I do not care). Like Silver Surfer or the X-Men ensemble in their respective NES titles, Wolverine is stripped of his strength to give the game a greater challenge. Want to use his claws? Prepare to lose some life. Every time you punch with your claws, 1/4 of one health unit gets taken away. Perhaps this doesn’t sound like much health. Well, after defeating about ten enemies, your life bar will be decreased by half. And enemies come more readily than extra health. Taking away Wolvie’s self-healing properties makes sense in a gaming context (how else would he lose lives?), but limiting his claws via health loss? The claws are an essential part of Wolverine’s shtick! Health – replaced by hamburgers and booze bottles – is scarce. Enemies are plentiful. Hit detection is terrible. When using your fists sans claws, you have to come right up to the enemies’ face to hit them. If they walk into you at all, you’ll lose health. Your health drains quickly too if the enemy sprite lingers on Wolvie’s sprite. It’s obscene what can even damage you in this game. In the water stage, you see bubbles and think, Well, Wolverine has a limited air supply, so perhaps these bubbles will lend me some air? Then they pop and Wolverine takes a blow like… like someone other than Wolverine; that must be one super acidic bubble to burn right through his adamantium-enbalmed skeleton. A chorus of nerdy sighs is the only appropriate response to such an offense. Wolverine is nothing less than the painful neuter of one of comic book’s most timeless superheroes.
F
The following two tabs change content below.