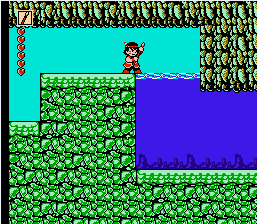 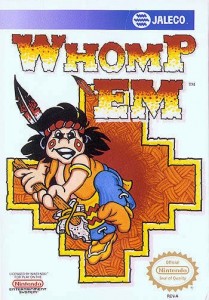 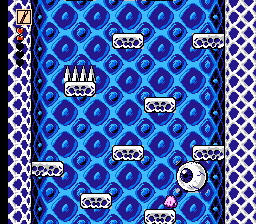 The ghost of H.P. Lovecraft did some design work here.

Perhaps the only Mega Man-inspired title to feature a Native American protagonist, the abhorrently titled Whomp ‘Em doesn’t break racial boundaries inasmuch as it mindlessly uses them to gloss over the game’s original premise. In Japan, Whomp ‘Em was known as Saiyuki World II and was based on the forever-popular Chinese novel, “Journey to the West”; instead of playing as Soaring Eagle, you controlled Sun Wukong, the King Monkey. Most Westerners would be unfamiliar with any Chinese novels, popular or otherwise, so I can understand Jaleco wanting to make the game easier to comprehend for U.S. players. It makes little sense, though, to add a Native American character among settings and enemies that are clearly Asian in origin, just to… provide more context to an American audience? I’m not sure what Jaleco was thinking with the ol’ character switcheroo here. Thankfully, it doesn’t detract from Whomp ‘Em‘s playability. Just knowing that Soaring Eagle used to be Chinese will provide you some context when you’re fighting bears in a bamboo forest.
Whomp ‘Em‘s gameplay is standard B-tier platforming on the NES: enjoyable enough to play, but lacking the essence of the “perfect” platformer. Your time is spent avoiding falling projectiles, climbing through mountains and trees, and spearing anything that moves. Like Mega Man with his arm cannon, Soaring Eagle lives and dies by his spear. After you slay each level’s end boss, you’ll acquire upgrades like a mini-flamethrower, a rock-breaker, a cloud-former, etc. Use the upgrades as much as you want. Unlike Mega Man’s weapon upgrades, these have unlimited uses. Just don’t be surprised when you continue to use the traditional spear more than any enhancement; they’re more to acquire hidden items within the stages themselves, rather than assist you in taking down bosses or enemies. Also, for whatever reason, you scroll through the upgrades with ‘Start’ and pause the game with ‘Select.’ It was a good half-hour before I had gotten used to this button arrangement.
Whomp ‘Em isn’t as polished as the Mega Man series, but I’d wager fans of the Blue Bomber would praise this game’s difficulty. One life (unless you find extra lanterns hidden throughout the stage), a few hearts (collect a lotta gourds from fallen enemies to get more hearts), and unlimited continues are Soaring Eagle’s lot. My time with the game proceeded as follows: play through a stage, get hit a few times, have two out of five hearts remaining, make it to the end boss and die after they hit me once, then use a continue to start over and begin the cycle anew. Progression is possible, but one must carefully go through the levels and collect as many lanterns as they can find. After the introductory level and the level known as Sacred Woods, the difficulty increases significantly.
Whomp ‘Em has a fittingly bizarre style that I miss in our current one-note era of gaming. For example, when Soaring Eagle dies, he makes a large crying face, splits into three parts, and explodes. The enemy and boss designs are inspired, ranging from drugged-out snails to dancing frogs to Crash Test Dummy lookalikes. If anyone tried to do this stuff today, it would probably be written off as weird for weirdness sake. In Whomp ‘Em, and other similar (mostly Japanese-developed) 8-bit games, this aesthetic just works. Unfortunately, it’s a case of style over substance. While I enjoyed my time with it, I’m hard-pressed to remember much about any of the levels, besides their ever-increasing challenge. If I take anything away from Whomp ‘Em, it will be the character Soaring Eagle and how he was once Chinese.
B-
The following two tabs change content below.