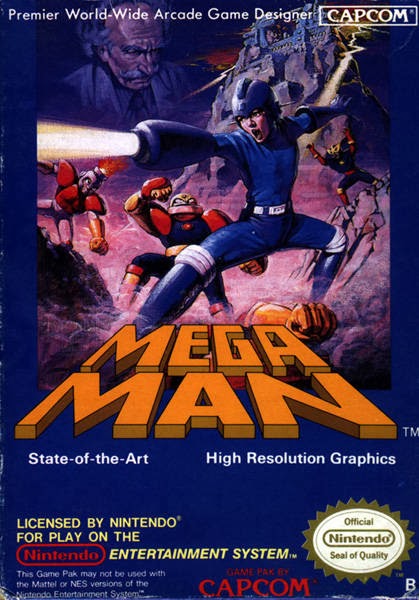 The PAL cover… still far superior to Pops Lumpy on the American cover.

Instead of Mega Man’s typical eight bosses, there are only six here: Bomb Man, Guts Man, Cut Man, Elec Man, Ice Man, and Fire Man. You can tackle them in any order, but true to form, it’s better to find out each bosses’ weakness first. Unlike other Mega Man games, however, the bosses aren’t nearly as difficult. They’re all easily beatable with a few shots of whatever weapon they’re weak against, and if you have to use your Plasma Cannon (your main weapon), you could still probably take them down if you have full life. Nevertheless, these are the first six, the ones that Wily used to begin his Robot Rebellion against the world, and particularly, his rival, Dr. Light.
By the by, I’ve included links below in each bosses’ name to videos of run-throughs for each stage (what a strange convoluted sentence). Read and then watch, watch and then read, watch and don’t read, etc, but I believe the videos complement the writing.

Take a good look at your former robot brethren, now thirsting for your oil. 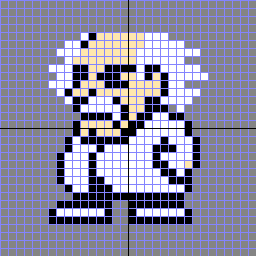 Thanks to vgmaps.com for this sweet pic of Dr. Wily!
The man who started it all leads you on a wily doctor chase across four stages, while resurrecting the bosses just because he can. HEY, HE TRIED TO WARN YOU THAT HE WAS WILY! LOOK AT HIS INSANE EYEBROWS!
STAGE 1
The first stage is brutal, and the music says as much. It begins as a haunting elegy, preparing Mega Man for his potential failure, before shifting to a more curious, hopeful sound. It’s the best piece in the entire game and it paves the way for even greater tracks to come in the later games. If three Big Eyes in a row and narrowly avoidable flames weren’t bad enough, there’s spikes, Foot Holders, and perhaps one of the worst mini-bosses of all time, the Yellow Devil. This obnoxious rock monster takes himself apart and throws his pieces at you until they regenerate and make his full form again. After he’s in his full form, you have a second to hit his eye with your Thunder Beam, but it barely takes off any damage, unless… you bust out the ‘Select’ Trick. It’s cheap, but incredibly effective. Essentially, you pause and un-pause the game as the Thunder Beam hits the rock monster, and by doing this, the game glitches, the beam continues to hit the monster, and eventually, destroys him completely.
STAGE 2 – STAGE 3
The second and third stages are pretty short and sweet. You’ll fight Cut Man and Elec Man in stage two, before fighting a clone of yourself. He’s not as tough as, say, Dark Link in Zelda II, though he does copy everything you do, including when you change weapons. The third stage has you fighting a weird seven-part Bubble Generator called CWU-01P (Capcom apparently wasn’t aiming for a memorable name with this one). Destroy seven increasingly speedy bubbles and it’s on to the last stage and Wily’s end.
STAGE 4
This last stage reunites you with the other four robots, Bomb, Guts, Ice, and Fire. They’re pushovers, natch, and then comes Wily. He’s surprisingly not that difficult. If you engulf him in the Fire Storm, his ship will start to break down. After his first lifebar is gone, blast him with the Thunder Beam and his vessel explodes, leaving him begging for mercy. Because you’re Mega Man and Harbinger of all that is Blue and Good, you spare his life and he presumably wiles away.
While the credits roll, Mega Man runs through mountains, fields, and a city to get back home to Roll and Dr. Light. About halfway through, he takes off his suit, allowing his robot body to feel the sun’s rays and let the wind blow through his black pompadour (perhaps he’ll ponder why he resembles Astro Boy…). Eventually, he makes it home and jumps in triumph. Capcom of America congratulates you for beating one of the hardest games ever.
To sum up Mega Man, it’s a solid game and a good start to a great series. Because this is the first game, it does feel a little rough around the edges. The graphics aren’t as vibrant or colorful, the music not as epic or eclectic. Mega Man seems to slide when he lands, which isn’t something I remember from later games, and is a severe detriment. The difficulty balance is off, as well. Parts of the game are easy to breeze through, while other parts are insane. No passwords, either. Gamers were expected to beat this entire thing in one sitting, which is crazy. Thank goodness for save states nowadays. These might not seem like little complaints, but strangely, they don’t bring the game down. I really enjoyed playing through Mega Man again, and after twenty-five years of gaming “advancements,” that’s saying a lot. Well done, Capcom.
A-
P.S.
I’d love some feedback. This is my first time tackling a game in this manner, so if, like Mega Man, it feels a little rough around the edges, that’s to be expected. Let me know if you’d like less details or (please God, no) more details. I’d also like to thank Nintendoage.com for their manual scans and megaman.wikia.com for an insane wealth of information about Mega Man.
The following two tabs change content below.