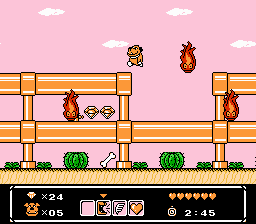 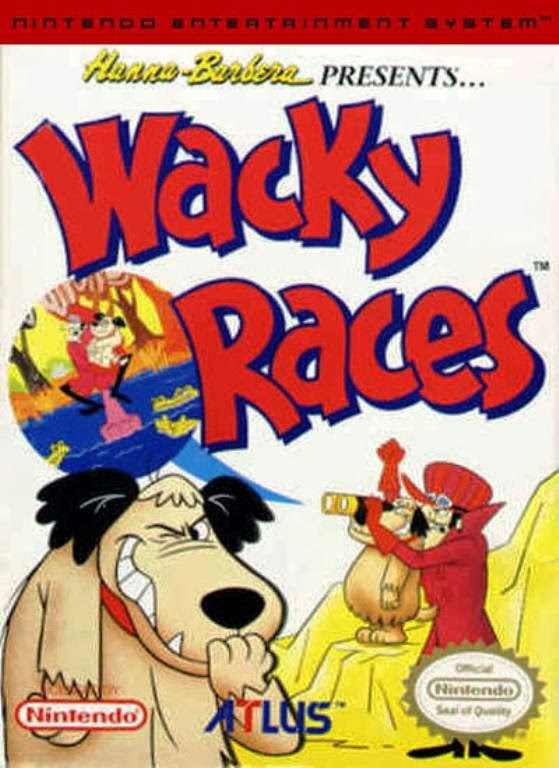 Is Dastardly showing Muttley the future?

This reminds me of a game with another hairy, barrel-chested individual.

Strap on your helmet and safety goggles for Wacky Races, inspired by the Hanna-Barbera cartoon of the same name. Muttley, the ever-snickering/grumbling dog, is who you control. If you recall, he was kind of an ass on the cartoon, but he’s quite the endearing, resilient pup in the game. When you start a level (three worlds with three stages each to choose from), you’ll notice a bar with four icons on the bottom of the screen: a bomb, a bark, wings, and a heart, in that order. When you collect bones throughout each stage, an arrow will appear above each icon. Collect one bone and you’ll be able to select the bomb; two bones, the bark, three bones, the wings, and so on. The bomb and the bark are Muttley’s “special” attacks of choice (his standard attack is a bite). The bomb is the best, thanks to its long range. The wings enable Muttley to hover (using his tail, no less), and the heart will increase his health. The upgrades stay with you from stage to stage, but if you die, everything but your hearts disappear.
Don’t worry about death, though. Compared to other platformers on the NES – even cartoony ones – Wacky Races is easy. Seconds will go by in stages where you won’t see an enemy, and the game throws you enough bones and extra lives to run through it twice. Also, Super Mario Bros. 3 was an obvious inspiration, with Atlus even going so far as to rip-off certain stages and enemies (World A-2 – the desert pyramids, with the hopping fire, among others). Easiness and unsubtle rip-off aside, the unique upgrade system – similar to Konami’s classic shmup series Gradius – and Muttley’s goofy charm keep Wacky Races fresh. Light, breezy fun is better than no fun at all.
B
The following two tabs change content below.