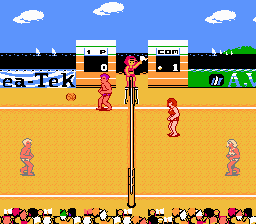 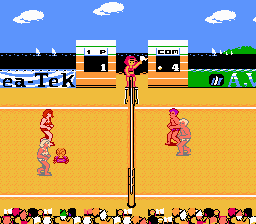 Venice Beach Volleyball is your standard back-and-forth volleyball throwdown, complete with salacious cover. There’s four teams – two male, two female – to choose from, each with “Receiving,” “Speed,” and “Smash” statistics. The stats don’t vary much from team to team (though you should count those losers Kelly and Morica out), so pick whomever you prefer; I went with Lisa and Bambi ’cause the dudes looked a little too sun-baked. The solid controls help the game’s ranking immensely. ‘A’ serves, hits, and dives, while ‘B’ spikes. The game automatically switches to your partner when you pass the ball, and a magical cursor appears to inform you where the ball is going to land. The latter is genius, and also necessary as the ball frequently exits your line of sight. Shouldn’t all volleyball games have a cursor? It doesn’t make the game easier, just less frustrating. As much as I enjoyed Kings of the Beach and Super Spike V’Ball, the beach broskis would have benefited from such a feature.
And Venice Beach would benefit from Kings and Super Spike‘s looser, goofier gameplay. For a game as energetic and fast-paced as volleyball, Venice Beach feels stilted and lifeless. The characters shuffle slowly around the court, except when they dive. There’s no crowd noise to sweep you into the game, just an upbeat ditty looking for a place to belong. The most exciting/confusing aspect of the game is when a crab collects the volleyball and walks off screen. Is it the ref’s assistant? Why are the players letting a crab handle the ball when its claws will inevitably pop it? It’s cute, sure, but what if the crab lost its temper and pinched someone? The lawsuits! So many questions. If only the rest of Venice Beach was as enticing as its crustacean helpmate.
C+
The following two tabs change content below.