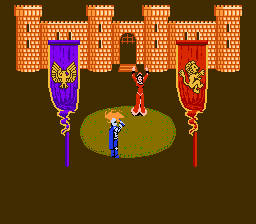 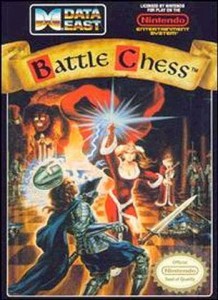 Why is a demonic jester lurking over the board? 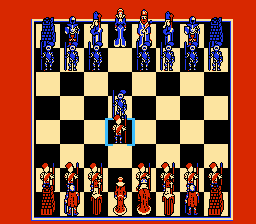 I’m not sure how anyone could play a full game. It’s really that bad.

Battle Chess was everywhere: from the Commodore 64 to the Amiga to Windows ’95 to this freaking terrible NES version. Most gamers of a certain age have played one of these versions, but I don’t know too many who remember it fondly. Chess will continue to live on through the ages, but technology comes and goes and Battle Chess is a product of an ancient time. The NES version, in particular, is grueling to sit through, thanks to some molasses-covered animations. I’m not sure I’ve ever seen anything move slower in my life than these chess pieces. Just wait until you see a knight move past a pawn. You could take a nap, wake up, get a cup of coffee, drink the cup, come back to the game, and the knight would still be trying to tango past the pawn. I’m being facetious obviously, but the slow pace of the game is really intolerable. All Battle Chess really has to offer players, outside of a traditional game of chess, are cheesy battle sequences. If I wanted chess with a side of battle, I’d pop in Archon. If you’re hungry for straightforward chess on your NES, The Chessmaster should be your go-to. Battle Chess is about as slow as any game I’ve ever played, and only the most patient and tolerant of chess players would want to work with it.