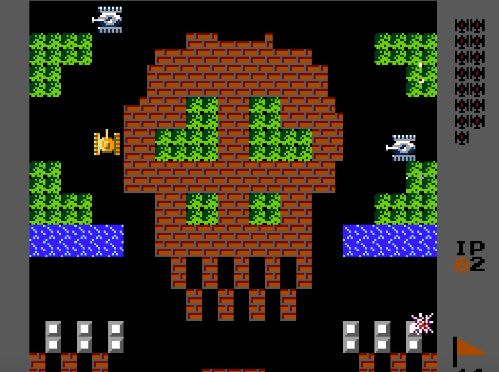 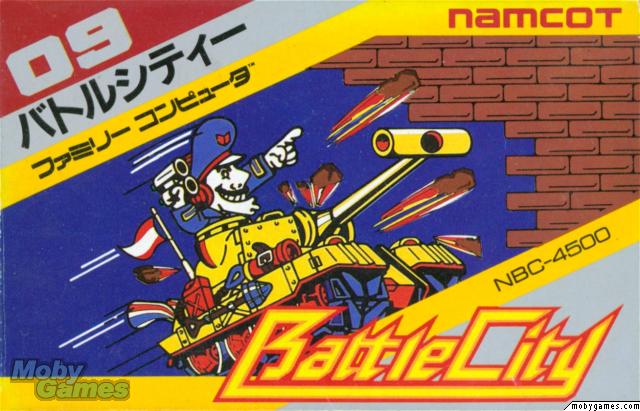 Maniacal dictator not included. Also, NAMCOT? (thanks to MobyGames)

Battle City, for better and for worse, runs in my blood. I first saw my grandpa and my uncle playing it together when I was five years old and was unimpressed. It was one of forty-one other games included on a bootleg 42-in-1 cartridge that my older cousin brought back from Thailand, and at the time, I preferred the more colorful, goofier games, like Chack ‘N Pop and Nuts and Milk (you can’t make these titles up). As I grew up and watched my relatives play Battle City repeatedly, I appreciated it for the unique title that it was. It never became my favorite, but I couldn’t deny its originality. For whatever reason, though, almost every single one of my brood of cousins lives and breathes Battle City when they’re at my grandmother’s house. It’s not like there aren’t other Nintendo games either besides the 42-in-1, but I rarely see any of them pulled out. Battle City was, and remains, my extended family’s go-to game, and not just my family’s. Any friend of mine that saw it instantly wanted to try it, and usually, fell in love with it. It makes me think that Nintendo/Namco really blew an opportunity for some coin by not releasing Battle City in the States.

The gameplay is simple: you are a yellow or green tank, and your goal is to defend your eagle base from a swarm of about twenty baddies. Each level has unique terrain, and actually reminds me a little of a simpler, more action-oriented Advance Wars. The levels are made up of mostly brick, with varying degrees of camouflaging grass, white brick/concrete, ice, or water. Your enemies’ tanks are colored white, but there are three red tanks that pop out during each stage. Hit these red tanks once and an item will appear randomly on the field. This item can be anything from a star, which enables you to shoot faster (three stars allows you to destroy the otherwise impenetrable white bricks), or a grenade to destroy all the enemies on screen, or a stopwatch that temporarily stops the enemies, etc. The levels get hard fast, and if you don’t get a steady supply of stars and lives, prepare to be destroyed quickly. This game isn’t nearly as fun without a second person either. When you get tired of shooting tanks through 35 levels of mayhem (the levels repeat with increased difficulty once you get to stage 36), there is a level editor. Sadly, you can’t save your levels, but it’s still a groundbreaking feature for such an old NES game.

The technical aspects of the game are pretty standard for an early Famicom game, with the exception of the fantastic sound effects. I’m always surprised by how awesome the tanks sound simply rumbling around. Shots being fired, tanks exploding, getting power-ups – the sound design, along with the carefully crafted battlefields, make Battle City one-of-a-kind.

While Battle City is not my favorite NES game like it is for my crazy, passionate younger cousins, the game is such a standout on the NES library. There’s really nothing like it (at least that was released in the States) and for that reason alone, it’s worth obtaining “somehow.”