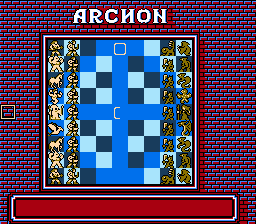 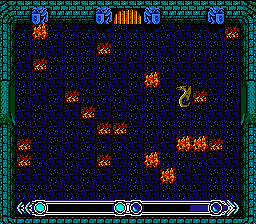 Well… I had a Water Elemental.

Upon first glance, Archon appears to be a simple game of monster chess, Light versus Dark. On the Light side are Knights, Archers, Valkyries, Golems, Unicorns, a Djinn, Phoenixes, and a Wizard; on the Dark, Goblins, Manticores, Banshees, Trolls, Basilisks, a Shapeshifter, Dragons, and a Sorceress. All the pieces are set up like in chess, with seven Knights and Goblins acting as pawns on their respective sides, and the other pieces usually placed in order of strength and weakness. The difference between chess and Archon lies in the characters’ movesets and what happens when the characters engage each other. Almost all the monsters have similar three-position move-sets, either on the ground (Golems, Trolls, Manticores, etc) or flying (Phoenix, Dragon, etc). Positioning your pieces in a strategic way helps some, but it’s not essential like it is in chess.
What is essential, regardless of what side you’re playing, is engaging the enemy strategically. When two creatures of opposing sides clash, they enter into a battlefield and face off against each other. In these scenarios, it behooves you (if you can) to pit a creature of equal or greater value to the creature that comes against you. You wouldn’t, for example, want to pit a Troll against a Unicorn. Unicorns are fast and strong, while Trolls are strong but incredibly slow. Because of their magical abilities, the Wizard and the Sorceress are the two strongest creatures on both the light and the dark side. They can heal and revive wounded allies (if your creature takes massive damage in a battle), summon elementals to battle for them, imprison creatures from moving, and shift time. Shifting time has to do with the ever changing colors of the board. If the board’s colors are mostly light (white, cyan, green), the Light side has more health and if the board is darker (purple, dark blue, black), the Dark side has more health. If you shift time, whatever colors, darker or lighter, the board was shifting towards, reverses.

Let the games begin!!! Oh ho ho ho ho!
Archon gives chess a more magical, bloody kick, and while it’s moderately fun for a time, it doesn’t have chess’ long-lasting appeal. The battles, in particular, feel choppy and restricted. You’re only allowed one shot/attack at a time, and how quickly that shot/attack reloads depends on the strength of your character. In my opinion, all characters should be able to attack as quickly as they want, and the strength of their attack should be the only thing that’s different (i.e. Knights/Goblins are always the weakest, since they represent pawns). Also, the Wizard and the Sorceress are way overpowered. I suppose they’re comparable to the Queen in chess, but at least the Queen has to wait for her lackeys to move out of her way before she can wreck havoc. These magicians can cast spells from the first move of the game, if you so choose. As do most games, Archon excels with a second-player. Playing against the computer is decent for a time, but you’ll either get so good, you’ll clobber the CPU time and time again or you’ll just be frustrated with how good the computer is at battling and quit. Archon‘s a unique one, and I’ll give it points for that, but it couldn’t hold me.
C+
The following two tabs change content below.