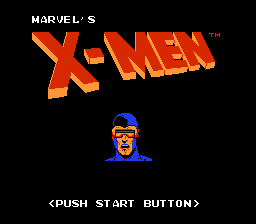 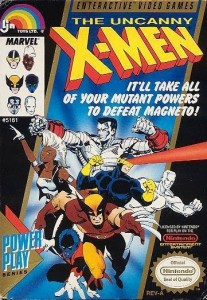 Where’s a priest when you need one? 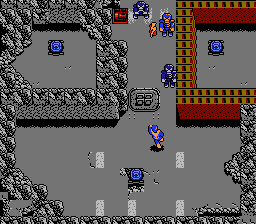 Webster defines “uncanny” as “strange or unusual in a way that is surprising or difficult to understand.” This word applies to the X-Men themselves, as anyone whose read the comics or seen the movies can attest. But it also describes this game, one of the most mysterious pieces of unapologetic trash I’ve ever played – for the NES or any system. X-Men has its obvious terrible qualities – chunky Atari graphics, melody-deprived music, tedious button-mashing gameplay – but these aren’t what make the game stand apart from other bad NES titles. No, X-Men is so much worse than the sum of its parts. Playing it, one gets the sense that LJN exerted great effort in making this game as horrible as possible. This is no slapdash effort. It takes long man-hours and rolled-up sleeves to make a game this foul. But the most confounding aspect of X-Men isn’t how bad it is: it’s that the game seems to understand its badness and celebrate it, rather than be ashamed.
Take a gander at the title screen:

The look of horror on Cyclops’ mangled face is a perfect summation of what you’re about to endure.
You can pick any stage you wish to play from the outset, but it’s wise to live in the practice round for a bit; mostly so you can get used to the characters’ and their different, uh, “skill sets.” There’s six X-Men to choose from: Wolverine, Cyclops, Storm, Colossus, Iceman, and Nightcrawler. Cyclops, Storm, and Iceman all have long-range attacks, while Storm and Iceman hover instead of jump. Wolverine and Colossus have longer health bars, but their short-range attacks don’t amount to much, other than constantly taking damage. Nightcrawler is able to walk through walls and other barriers, making him a valuable asset for later stages. Like Teenage Mutant Ninja Turtles, once one of your X-Men dies, they’re gone forever. If you’re playing one player, you pick two X-Men. The first choice is yours, while the CPU controls the other (two-player is always co-op). Word to the wise: get the CPU killed as quickly as possible because they will hold you back from progression. They rarely attack anything, and the enemies will always target you, regardless of the CPU’s presence; better just to have a moving wall kill ’em and be done with it.
The stages are comprised of never-ending enemies, warps to nowhere, and strewn about trash. If you don’t like killing (or being killed by) waves of robots amidst crudely rendered apocalyptic rubble, Uncanny X-Men is not the game for you. Enemies will drop items constantly, like extra energy, brief invincibility, clear-the-screen explosions, and… magnets that hold you in place for a few seconds while enemies have their way with you. You will always need energy because you’ll never know when you’re getting hurt or not. As Cyclops, I was rammed into several times by mystical orbs and never lost an ounce of health, but one bite from a robot centipede sent my life bar careening. Getting crushed by a moving wall or walking into an electrical field are one-hit kills, but neither barrier has a set pattern for when they move or turn off/on. Warp points – needed to get further into the level – are everywhere, some leading to dead-ends, some leading forward. You collect keys which you need to beat the stage, but they’re only helpful if you get to the end of the stage, and you never know where the keys are unless you shoot creatures in every room (even the dead-end ones). It’s exhausting to write about, and draining to play. After you’ve gone a round or two, you’ll need a mutant-powered drink just to relax. 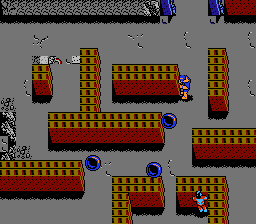 Colossus is stuck behind this wall. Unless you hold his hand and lead him out, he’ll rust in there.
Do you want to know how deranged Uncanny X-Men is? To access the last level, you have to decipher a code within text messages that only appear after you complete each level. There’s no way to decipher the code because the text all reads the same; how people even discovered it, I’m not sure, unless one of the developers revealed its existence. Here is the full message: “The last mission can be reached from the mission screen by pushing ‘SELECT’ and seek the advice of the label to make it to the final mission.” On the back of the X-Men cartridge is a label that has the code “B+Up+Start,” but unless you knew about the secret message hidden within the game, you could press “B+Up+Start” forever at the title screen and it wouldn’t change a thing. Only by hitting ‘Select+B+Up+Start” can you access the final level with Magneto, and end this nightmare forever. Very few games go out of their way to screw the player this deeply. Congratulations, Uncanny X-Men: I don’t comprehend you in the slightest.
F-
The following two tabs change content below.