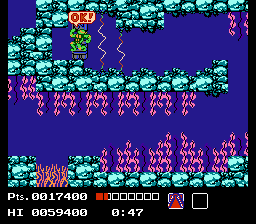 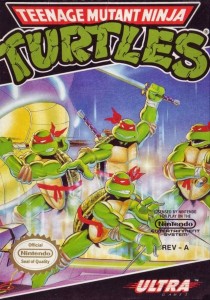 The cover remains striking, despite the red bandana confusion. 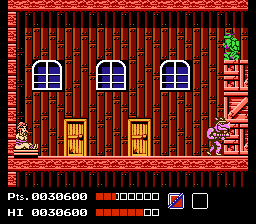 If you were a child in the late 80s/early 90s and you didn’t love the Teenage Mutant Ninja Turtles, you were probably a lonely kid on the playground. Like Pokemon a decade later, the Turtles had their stubby grip on every entertainment outlet possible. The cartoon was one of the most successful of all time, running for a total of ten seasons. To give you an idea of how impressive that is, most network cartoons during that time – even popular ones, like “DuckTales” or “Thundercats” – only ran about four seasons at best. The action figures were iconic. Who doesn’t remember the Turtle Party Wagon, the Technodrome, and how friggin’ difficult it was to find Shredder in toy stores? The 1990 live-action movie (which should have been a disaster, but remains entertaining to this day) made $200 million worldwide on a budget of $13.5 million. There were Pizza Hut tie-ins, a legitimate concert tour called “Coming Out of Their Shells” (totally owned the cassette), and, of course, the latest youthful trend, video games. Whatever merchandise the Turtles emblazoned with their goofy green faces, children were there, ready to shell over their parents’ money. 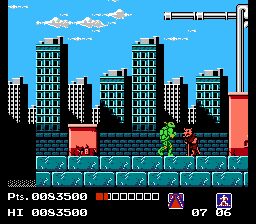 Splinter provides a hearty fist-bump for rescuing him.
In 1989, Konami released two Ninja Turtles games. The first was Teenage Mutant Ninja Turtles: The Arcade Game, a four-player beat-em-up for (obviously) the arcade. It wasn’t revelatory, but it was everything a Turtle game should be. The graphics, characters, and story were lifted from the cartoon. Each player inhabited a turtle (poor shlubs who got stuck with Raphael) and fought their way to Shredder. It was perfect NES port fodder – and it indeed arrived on the NES two years later as Teenage Mutant Ninja Turtles II: The Arcade Game. Unfortunately, the original Teenage Mutant Ninja Turtles (hereafter referred to as TMNT) for NES gave millions of Turtle-loving children a special brand of shell-shock.
One wanted to love TMNT in 1989. Upon first play, it showed promise. The mix of non-linear exploration (particularly in the third and fourth worlds) with side-scrolling action, as seen in Zelda II and Castlevania II, was still unique at the time. You could switch between the four Turtles at any time by pressing ‘Start.’ Enemies, like Mousers, Bebop, and others hailed from the cartoon. The music was jaunty and carefree. If one was a Turtles fan, this was all you needed – or so you thought.

No, Michelangelo, it’s not “OK!”
Despite the happy tunes guiding the Turtles’ journey, all was not well in the sewers. The Turtles themselves were bogged down by clunky controls, and Konami took full advantage of their shoddy programming. Many areas have slender gaps that are impossible to jump over without luck. Remember the dam level? Navigating through narrow paths of electrocuting seaweed isn’t reasonable when you’re a four-hundred pound Turtle-man, and your poor health (or the loss of a Turtle or two) at the end of the stage will confirm that. The only Turtles worth using are Leonardo and Donatello. Michelangelo and Raphael’s weapons are too short to do any significant damage to the onslaught of enemies, and thus, two of your four “lives” are pretty useless. Assuming you’re using a Turtle who has a long-reach weapon like Donatello, it’s quite effortless to kill several enemies in one blow. However, it’s also possible to get hung up on one or several enemy sprites, and have your life quickly whittled away. The biggest complaint one could have with TMNT, though, is the repetitive action sections. Konami programmed clusters of enemies, all with varying obnoxious patterns, to occupy any open spaces. It doesn’t matter how well you wield katanas, nunchucks, sais, or bo staffs, you’re going to get hit repeatedly. If you clear out a section of a room and walk an inch or two backwards before venturing forward again, all the enemies will reappear. This nonsense is eighty percent of TMNT. Your affection for the Turtles might not withstand shoddy controls, rambling, long-winded levels, and unfair enemy AI.
Then again, it just might. When I was five, I convinced myself TMNT was a good game. I loved it. As I fired it up for this review, I was warped back to a time when beating a crappy game with my favorite superheros was my only care in the world. During those tender years, I never got past the dam portion, but that didn’t stop me from trying over and over again – while holding the conclusion that TMNT was legit, and I just needed to acquire better gaming skills. I’ll always appreciate the fond memories I have with TMNT, but the game’s a mediocre pile of Splinter droppings. Proceed with nostalgia goggles or not at all.
C+ 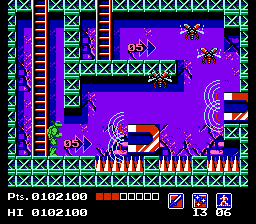 Leonardo decides to tap out.
The following two tabs change content below.