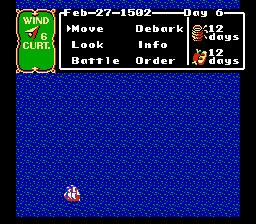 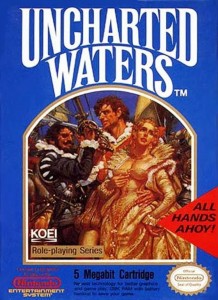 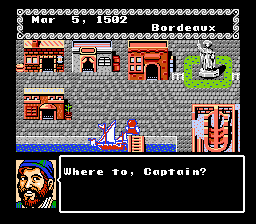 To the vineyards, “Fiddler-on-the-Roof” guy!

Another strategy-filled Koei misadventure, this time on the high seas. You play a Portuguese sea captain trying to reclaim your family’s noble status. Your father’s dead, lost at sea, and only his former first mate will lend you assistance at the beginning of your journey. It’s up to you to build a fleet of ships, recruit mates, and sail your way back to prestige and fortune. Uncharted Waters will force you to be a geographer/cartographer (circa 1500, no less), but if menu-driven gameplay doesn’t bore you to tears, expect a rousing adventure.
The initial tasks in the game are selling goods between ports in different countries and amassing a legion of ships and crew to man them. Buying and selling goods is the most important action from the get-go, as it will allow you to hire crew, buy bigger, better ships, and, as a result, have more room to trade more goods. Buy something cheap, like sugar, at a port in Lisbon, and sell it for mad coin in Oslo. Buy low, sell high. It’s trial-and-error figuring out exchange rates (though you can get a feel for certain countries’ economy in the bar), but if you’ve played any Koei games, you should be used to their shenanigans. Sailing around the world is a different story. One of Uncharted Waters‘ major flaws is the inability to see ports unless you happen to stop your ship near one. Unless you’re feeling particularly adventurous, go to GameFAQs and check out the World Map that user “sprays” rendered; otherwise, you’ll be sailing blind. Once you’ve sailed a bit, mates are more likely to join your crew (be sure to tip your waitresses too for some hot hints). After you’ve amassed some cash, it’ll be time to buy some used ships. Stick with the low-end ones for now. There will be plenty of time to buy galleons later. Also, always make sure to have enough food and water for long voyages. The days pass quickly on the sea, and if you’re sailing to The New World, you don’t want your crew dying on you.
Build a reputable name for yourself. Word will get around and Uncharted Waters will really open up. The King of Portugal will ask you for favors, some clean, some dirty. Do them. The more favors you do, the more likely he’ll give you the Princesses’ hand in marriage. Guild masters will send you on treasure hunts to the far ends of the earth. These quests aren’t mandatory, though valuable items may come your way if you do them. You’ll also engage in battles with pirate ships (and possibly, Spanish/Turkish fleets). For the latter, don’t even think of fighting unless you’ve got a few galleons equipped with cannons. Fights are brutal, and even if you’re well-equipped and able to finish them off, you’ll always take heavy damage. Then again, if you’re a peacemonger, you can equip your ships without weaponry and hope for the best. The choice is always yours!
Uncharted Waters was ahead of its time, and yet, somewhat bogged down by Koei’s bad habits. Though I wouldn’t use the term “sandbox” to describe it, the idea that you can literally sail around the entire known world (with ports in most locations) was very forward-thinking on Koei’s part. Then again, like most Koei games, you really need to have some idea of what you’re doing just to get started; without Paul McPherson’s FAQ over at GameFAQs, I would never have known that I needed to sail into a port to make it appear, for example. In a way, the dichotomy between the aforementioned elements seemed to be Koei’s philosophy in the 8/16-bit days: give the player a wide variety of options, with little clue as to how they work. I still enjoyed Uncharted Waters, but without any assistance, the game falls apart.
B
The following two tabs change content below.