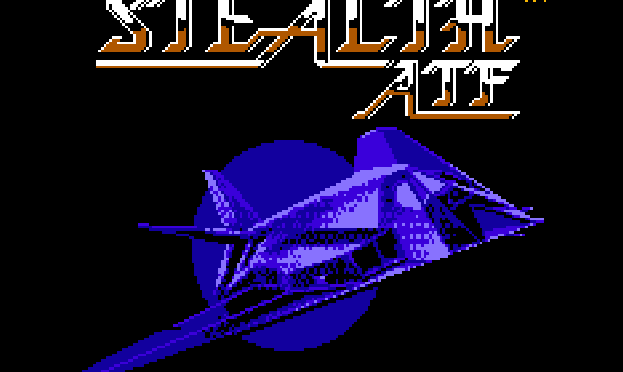 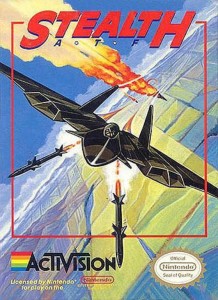 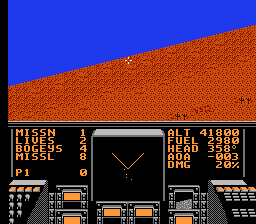 Is that supposed to be the Middle East or a Nacho Cheese Dorito?

Throw on some Whitesnake and put on your Tom Cruise-approved sunglasses: Stealth ATF puts you in control of one of the sleekest jet fighters of the 1980s. Yet all is not day-glo neon and Good Morning, America. Despite Imagineering’s attempts to immerse you in a Stealth fighter, the missions make you feel as though you could be flying any two-bit plane in any pathetic 8-bit flight simulator. Each mission consists of three objectives: take off from a runway, shoot down some bogeys, land on a runway. The runway sections are solid. Accelerating forward while holding down on the ‘D’-pad is about as realistic as flight sims get on the NES. Once you’re in the air, the Stealth fighter becomes hard to control. Centering your target on bogeys becomes extremely difficult. They’ll whiz right past your fighter time and time again, and the only way to attack them is to try and chase them or wait until they come around again. You can’t slow down in mid-air, which is realistic, but you should be able to focus on your targets, regardless of speed. Imagineering must have thought their “attack bogeys on every mission” formula was perfect, since there’s a seemingly unlimited amount of missions with the game. Don’t be fooled by their confidence. Aside from the runway portions, the game’s unplayable. Stealth ATF, much like the 1980s itself, never seems to end.
D-
The following two tabs change content below.