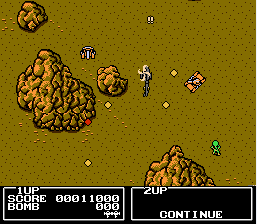 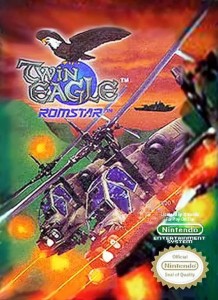 The Twin Eagle font looks RPG-ish to me. This cover is just all-around terrible. 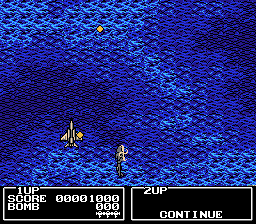 Believe it or not, the screen was moving quite fast during this portion of the game.

To paraphrase a Britney Spears song, the title Twin Eagle: Revenge Joe’s Brother is not a contraction, not yet a sentence. In particular, the independent clause after the colon caused me third-degree brow-furrowing. Sure, “revenge” can be used as a verb, but when was the last time you heard/read it as anything other than a noun? “Revenge Joe’s Brother,” huh. Who is Joe, anyway? Who is his brother? Why is Joe given a name, yet “Joe’s brother” lingers in anonymity? If Joe’s brother is the one we’re revenging, shouldn’t he have a moniker to establish a personal connection with the player? The manual doesn’t shed light on Joe’s Brother’s identity, either. Here’s an excerpt: “Joe’s Brother (!) was on a mission to protect our world from war and aggression. He was shot down in enemy territory while battling the enemy at their fortress.” Like the inscrutable Ms. Spears, Joe’s Brother remains enshrouded in mystery, despite being thrust into the spotlight. Just excise that pesky clause and call the game Twin Eagle. While the latter is uninteresting, it also eliminates any inane analysis and forces the player to focus on the game.
If I didn’t know better, I’d say Twin Eagle was Twin Cobra’s sequel. Both are vertically-scrolling helicopter shoot-em-ups, have similarly colored power-ups, and are hard as balls. Twin Eagle has the slight edge, though. It has prettier graphics, more engaging music, and it removes Twin Cobra‘s silly decision to have the enemies’ bullets be the same color as your own. There’s also hostage-rescuing, and towards the end of every level, the game will speed up for about thirty seconds and throw enemies at you with reckless abandon. It’s a nice touch, but it makes you hyped for a boss battle that never comes. Indeed, there are no boss battles in Twin Eagle, a strange decision given that most shmups – in the 80s and beyond – were known for ridiculous boss battles. This curious decision is somewhat offset by the addition of two-player co-op, though. Twin Cobra desperately needed another player to help bear the game’s intensity, so to have the option in Twin Eagle is aces. Neither Twin Eagle nor Twin Cobra are ground-breaking shoot-em-ups, but Twin Eagle tries harder to separate itself from the shmup pack. I salute Joe’s Brother and all his comrades for their efforts to protect us from war and aggression.
B-
The following two tabs change content below.