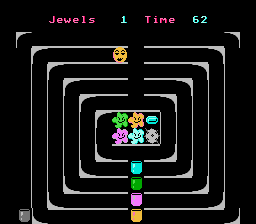 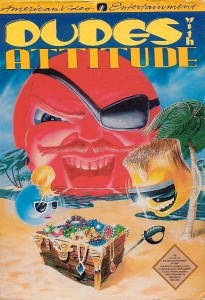 I trust this cover will be giving me plenty of nightmares in the upcoming holiday season. 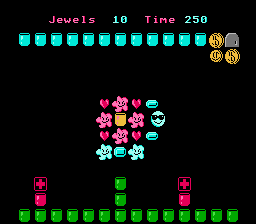 One of the earlier levels. The smushy star pieces are actually pieces of pre-chewed gum… ew.

Far be it from me to think highly of a game named Dudes with Attitude. Before I played it, I wanted to pretend that this game didn’t exist and move on. When I first turned on the game, a dark background filled with smiling cartoony yellow heads with dark sunglasses (think Faceball but less pixellated) greeted me. Not only was the game named Dudes with Attitude, the game developers American Video Entertainment were trying to pass off these disembodied creepy heads as dudes?! Sadly, the game is not only playable, but entertaining as well. It’s frustrating because I don’t want to give the developers any credit. They’re obviously trying to pander to the “tubular” culture of the early 90s, but said pander was probably see-through even then. Even reading the name now (let it wash over you… Dudes with Attitude) and knowing the game is decent, still makes me vomit in my mouth a little. Just a little, though.
Dudes with Attitude is, strangely, one of the more interesting puzzle games I’ve played for the NES. You pick from a plethora of yellow heads and choose your stage and off you go. The goal of each stage is to collect all the differently colored jewels before time runs out. Your head starts off yellow, but as you pass through large colored gems (larger than the jewels), your head changes color to match the color of said gem. Once you’re green, you can collect the green jewels, blue with blue jewels, etc. Your head never stops moving horizontally once you start the stage, which adds significantly to the challenge Each level usually has at least one obstacle to get in your way. Two hits and you’re dead, although some levels have first aid kit squares which will replenish your health throughout the level, provided you continue hitting them. The thirty-two levels included won’t give you sleepless nights like say, Lode Runner, but it will give you an afternoon of puz-tacular delights. If you can get past the severely outdated and misleading name (doesn’t it sound like a beat-em-up where you have to take down all the dudes that run the streets in Anycity U.S.A.?), please play Dudes with Attitude.
B-
The following two tabs change content below.