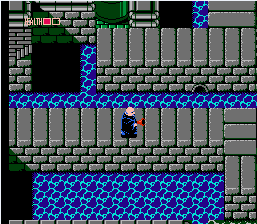 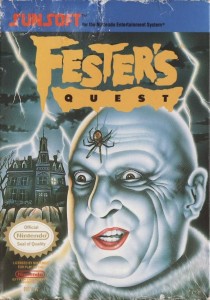 I’m both astonished and embarrassed for Sunsoft. They usually make such good games. Also, is Fester supposed to be Curly from the Three Stooges here? 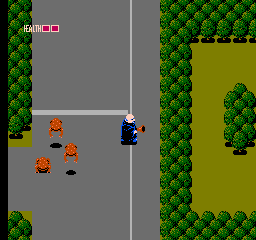 Those three toad/alien things will probably kill Fester, by the way. True story.

If you’ve ever been mildly interested in games for your NES, you probably know that Fester’s Quest is trash. Once one hears this about a game – any game, not just older ones – there are two options: to run for the hills, vowing never to play such an abomination; or to eagerly pick it up, wondering what horrors await you. Let me just say, I encourage the latter. Sometimes I encounter a game (like Dr. Jekyll and Mr. Hyde) that is universally panned and I end up seeing some good in it. Each person’s observations and viewpoints about a game are different, thus one should judge each game for one’s self. That being said, never play Fester’s Quest. It is a broken, confused mess of a game that doesn’t even try not to suck. Enemies take too long to kill. Fester is slow and unwieldy. You only have one life and “continuing” involves starting you over at the beginning of the level. Since it’s technically an action/adventure, you have to figure out where to go through repeated trial and error. For those who are wondering and perhaps waiting for a full-blown review, it’s never going to happen. I played this game enough to get a taste for it, that’s it. No one  should withstand such torturous, obscene game mechanics for the sake of the gaming community. Try to find the good in everything, I implore you. You’ll be a lot happier person at the end of the day if you make that your goal. However, for the sake of your happiness and the goodness you believe to be in other people, do not go near Fester’s Quest.
F
The following two tabs change content below.