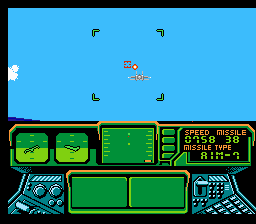 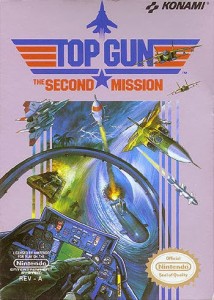 Was Top Gun for the NES a rousing financial success? There’s little reason for this sequel, other than to right the wrongs of the first title. Top Gun 2: Maverick Boogaloo refines the landing sequence that troubled so many gamers, and increases the arcade action of the missions, pushing the series into After Burner territory. It seems like a welcome change, until you realize your fighter jet moves too quickly. Destroying the majority of planes and subs isn’t an issue if you keep an eye on them when they appear. But make any sudden movements and your target alignment is thrown off, leaving them ample time to shoot a missile or two. Missiles take no time to reach your 3 o’clock and, like the first game, it’s one hit and you’re toast. Konami did add a barrel roll maneuver (press ‘Left’ or ‘Right’ on the D-pad twice quickly) which, when executed properly, is great for avoiding missiles, but the input (at least on my controller) didn’t work all the time. You get three missions instead of four this time. Sounds chintzy, but each mission is drawn-out to the point of ridiculousness. Only after you’ve rommelled through wave upon wave of planes, subs, and tanks, will the boss appear. There is a VS mode that you can tackle against a friend or against the computer, but it’s a trifling diversion at best. Top Gun 2’s gameplay is slightly improved, though the difficult, tedious missions may leave you frothing. Goose wouldn’t have wanted it this way.
C
The following two tabs change content below.