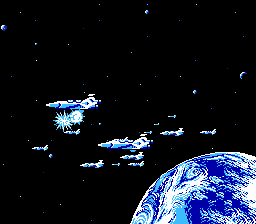 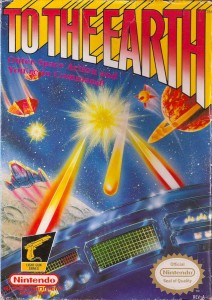 Finally, a game where I’m in command. 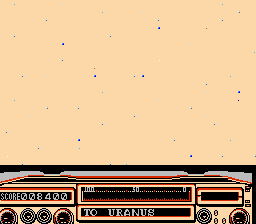 This is an image of your spaceship exploding. You will see this many, many times.

In an ironic, bitter twist, you never reach the earth in To The Earth. You arrive at Uranus, Saturn, Jupiter, and the Moon (in that order) then the game ends abruptly. From your spaceship perch on the Moon, the Earth appears closer than ever before. You’ve fought legions of space pirates and space rocks and other things that have a “space-” prefix attached to them, just to get to earth. And for what? Busted fingers and an empty tank.
For you see, To The Earth is an outer space Zapper game, the hardest and possibly only one of its kind. Like so many ambitious NES games, its unique premise is undercut by overly difficult gameplay. The action takes place from behind your spaceship’s view screen. Use the Zapper to attack any enemy ships and their missiles, but put some grip tape on your hand first. The enemy ships come quickly and in waves. If you don’t hit the enemies when they’re somewhat distant specks, you likely won’t hit them at all, and their missiles approach quicker than they do. Worse yet, you have one life bar that decreases every time you’re hit with a missile or every time you shoot. You can refill your bar by destroying ships with one hit, and one hit only. Two hits, and the bar goes down. The unnatural lightning pace of the enemy ships makes the hit detection seem wonkier than it really is. To The Earth has numerous shortcomings, yet despite them all, I kept coming back to have my ship shot down and never reach the earth. Disappointing, perhaps, but I knew it was coming.
C-
The following two tabs change content below.