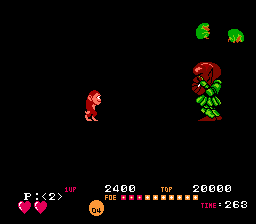 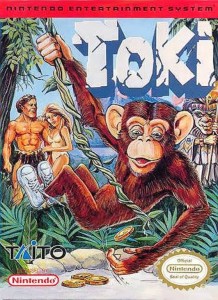 Oog oog. Are you folks ready to go ape? Unappealing cover notwithstanding, Toki is a minor platforming triumph. You play as titular lord of the jungle, Toki, a man-turned-monkey whose sweetheart Miho has been kidnapped by jungle wizards. Though Monkey Toki lacks Man Toki’s muscles, he makes up for strength with spit. Rivers and rivers of spit! Which apparently are acidic enough to eat through the toughest foes. Spit upgrades, like loogies (extra large spit balls), three-way spit, flamethrower spit, and bola spit are generously provided across the six levels. Toki spits in any direction too, which is convenient when you’re crawling down a vine and an ashen angel of death is flying haphazardly below you. Toki can also acquire a football helmet (extra hit point) and jumping shoes (jump extra high), along with several other point-giving collectibles. Despite never ending enemies and bosses with overextended life bars, Toki never becomes too difficult, thanks to top-notch controls. Toki jumps and ducks and hocks like he should, without any hesitation. The music is appropriate jungle-funk (though not the barefoot gorilla kind, unfortunately) the environments have unique crayon-like textures. Every aspect of Toki feels right. Insane boss designs aside, Toki isn’t a game that draws much attention to itself, but it’s one you shouldn’t oog-nore.
B+ 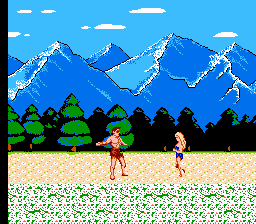 The Tok-meister’s earned this hug.
The following two tabs change content below.