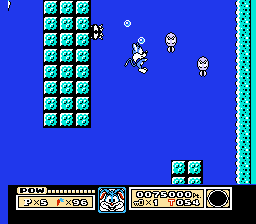 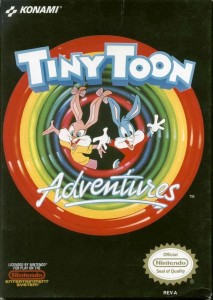 You get what you pay for.

More than a little reminiscent of Super Mario Bros. 3…

“Tiny Toon Adventures” was, depending on your age when they debuted, part of the Golden Renaissance of cartoons in the 1990s, or the beginning of loud, obnoxious OCD cartoons that continue without fail to this day. Either way, the show was successful enough to warrant several video game adaptations across numerous consoles. It’s to Konami’s credit that Tiny Toon Adventures is as good as any of Disney’s Capcom games, and should be recognized as one of the best licensed kids’ games on the NES, period.
Babs Bunny has been kidnapped by Montana Max, and only Buster and associates can save her! There are six worlds: the Hills, the Wetlands, the Trees, the Junkyard, Wackyland, and Montana Max’s Mansion. The first four worlds have three stages each while the last two worlds only have one stage. Before the beginning of each stage, Buster can choose one of three helpers: Plucky Duck, Dizzy Devil, and Furball. Each of them are useful at different times, depending on the stage layout. Plucky swims well and flies for short bursts of time. Dizzy Devil turns into a tornado, destroying everything in his path. Furball climbs walls and jumps the highest of the three characters. Though you start off each stage playing Buster, find the stars hidden in balloons around the stage to transform into the secondary character. After the end of every second stage, Buster has to avoid Elmyra’s advances for a limited time until an exit door appears, while the end of every third stage holds a boss battle. Nothin’ fancy, but it works.
Tiny Toons is little more than a short hop-and-bop platformer, but like Capcom with Ducktales or Rescue Rangers, Konami’s craft enhances what should be a rote kids game into something players of all ages can enjoy; regardless of their affinity for the source material. The controls are tight, the music is light-hearted, and the gameplay is standard but enjoyable. Regardless of if you grew up with the cartoon, Tiny Toons transports you back to a carefree, idyllic time. Not many games can do that.
B+
The following two tabs change content below.