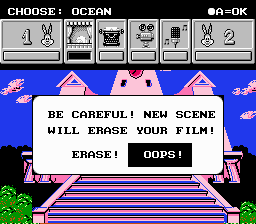 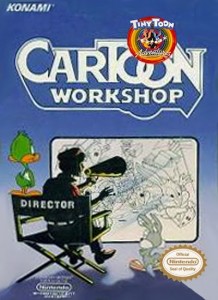 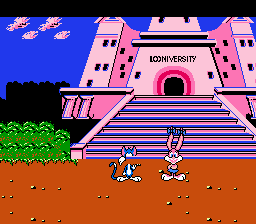 Uh… Furball? You all right there?

Tiny Toon Adventures: Cartoon Workshop is the type of pseudo-edutainment game one expects on the PC, not the NES. As the subtitle states, you create cartoons based on the Tiny Toons universe. When you start, the top-third of the screen is taken up by a menu that gives you cartoon elements: primary and secondary characters (though there are only six to choose from – where’s Hamton or Montana Max?), backdrops, sound effects, dialogue bubbles. There’s also a frame-by-frame editor that gives you up to five minutes of film. That’s close to the length of a full cartoon short! It’s ambitious, particularly for a system that didn’t offer mouse support and (Koei games aside) relied heavily on what we now classify as “console” games: platformers, action, sports, and the like.
But whether due to space limitations or sheer laziness, Cartoon Workshop, as a whole, isn’t deep enough. Only having six selectable characters is a joke, given the richness of the Tiny Toons ensemble, and the dialogue choices (‘It’s time to party, Buster-style!’) are pathetic; the option to write your own dialogue should be a given. Many of the backdrops are simple colors rather than actual environments. You can’t even save one cartoon. The instruction manual shows you how to record the finished product on your VCR. The game’s limitations (aside from the film editor) are striking, and as a result, your finished product will likely come across as a half-hearted imitation of a Tiny Toons cartoon. Cartoon Workshop is a well-intentioned idea executed on the wrong system. Budding young animators should look to computers for their kicks.
D
The following two tabs change content below.