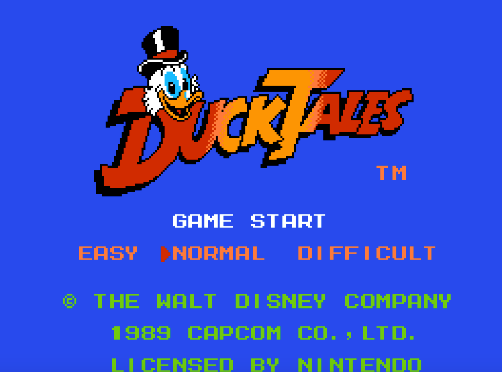 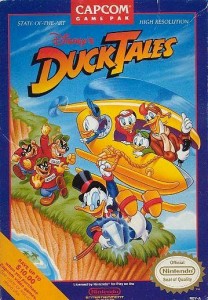 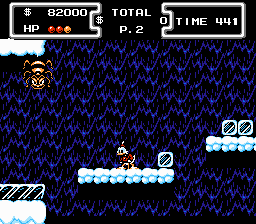 His pimp cane will find you. Even in the depths of Antarctica.

I don’t know a single Nintendo-raised child that hates on DuckTales or even finds it mediocre. It and its sequel are hailed as classic platformers that happen to be licensed games. How many times in the history of gaming has that sentence been written? Having revisited it for the first time in years, I’m a little less enthused, but more on crushing your nostalgic remembrances in a moment.
DuckTales has you playing Scrooge McDuck, the lovable old, miserly uncle of Huey, Dewey, and Louie. You travel across five levels to increase your fortune and encounter random mischief along the way, SUCH AS: child duck-nappings, insane gorillas, friggin’ annoying ghosts, surprisingly non-linear gameplay. Choose your stage, like in Mega Man? Don’t mind if I do, Capcom. Each stage is a unique exotic locale, like Transylvania, African Mines, or the Moon (?). Scrooge hits enemies by bouncing on them with his cane, which is a little more awesome than it sounds. The cane mechanic controls surprisingly well, although it can be a nuisance when you’re in a small space and the only way to kill an enemy is to bounce on them. At least give the option to use a straightforward cane jab, con sarn it! Hit detection is also an issue. If you don’t bounce directly on an enemies’ head or back, you will get hurt. It takes time and practice to get good and gives the game some replay value if you’re looking to perfect it.
I acknowledge that DuckTales is a technically excellent game, and that this and other Disney/Capcom collaborations raised the bar for licensed games. For whatever reason, I can’t help but feel that the platforming itself is sub-par. I had no desire to continue my quest once I had played through a couple stages. The stages themselves aren’t that interesting either, until the later ones like the Himalayas. True, there are several different paths one can take to the boss, but if the gameplay isn’t that interesting, why bother? The hit detection really got under my skin, as well; strange, as I don’t remember it being a problem years ago. I’m truly disappointed that I couldn’t find the same joy that I found as a kid in DuckTales. The rose-colored lenses have fallen to the floor and shattered, like so many obnoxious Webbigail quotes.
C+
The following two tabs change content below.