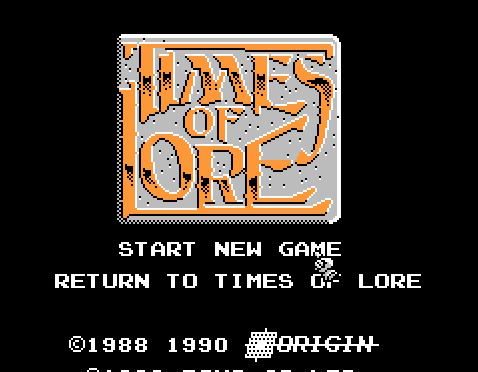 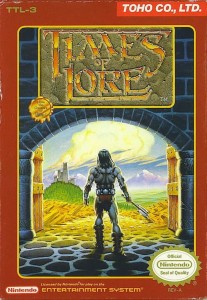 Evocative cover for a bland game. 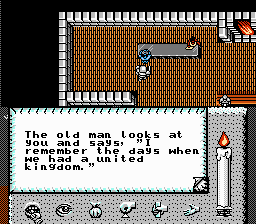 Times of Lore answers the question, “What if the original Dragon Warrior was a non-threatening action-RPG?” You play as a knight, valkyrie, or barbarian who runs errands for powerful citizens of Alberath. A Regent needs you to kill off another Regent who’s threatening his power? Done. Retrieve a chamberpot from an orc camp? Double done. ‘A’ is your attack, while ‘B’ brings up your menu system. It’s a standard self-explanatory menu – speak, give, examine, use, etc. – but, like all late 80s RPGs, feels somewhat stiff and cumbersome. Combat is almost too simple. Orcs, skeletons, wraiths, and spiders are defeated by pressing ‘A’ up against their bodies, unless you have a projectile weapon, like a dagger; usually even that won’t stop them from wanting to give you a kiss ‘neath your helmet grill. There’s no experience points to care about. Combat is only imperative to gather food (which you’ll eat automatically through your journey), green/blue potions, and red/blue scrolls. You can only hold one of each potion or scroll, though, so if you’re loaded up, don’t even bother engaging the enemy; they’ll just slow you down. Music is standard m’lords-and-ladies fare, the graphics are drab, and until you acquire the speed boots from an inn in the middle of the map, controlling your knight is patience-rending. Your character can move at a decent speed without the boots, but if he gets hit by an enemy or runs into a building, he slows down considerably. You’re then forced to build up your speed again, which takes a few seconds of game time. Times of Lore also raises the question, “What is Times of Lore?” The answer won’t hold your interest for long.
C-
The following two tabs change content below.