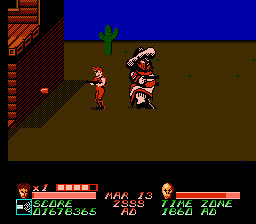 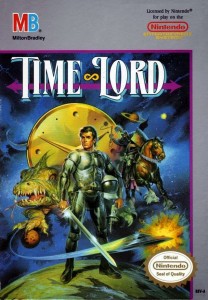 Ugh, time banditos are the worst.

Time waits for no man, including the man known as “Time Lord.” One would think if your birth name was Time Lord, you’d have some power over Time. But even Time Lords are subject to eras they supposedly lord over. In Time Lord (the Time Lord’s one and only starring vehicle), the Earth is being attacked by the Drakkon alien force in 2999. The Time Lord has one year to go to four different historical time periods – medieval England, American Old West, the Caribbean, and France circa WWII – collect five orbs per period, and destroy the Drakkon forces. But mind the clock, which is always pushing forward, regardless of the Time Lord’s pleas. If it strikes Jan 1., 3000 before you’ve had a chance to snatch orbs and curb stomp Drakkon, then it’s game over.
Collecting orbs in particular is an odd business. You don’t just find, collect, and push forward. Many of the orbs have to be grabbed by a leap of faith, or shot or jump-kicked. They are rebellious orbs. In one ridiculous instance, the Time Lord has to be stationary under the orb for it to move down onto him. How would anyone, including the Time Lord, know you’re supposed to do this unless the Nintendo Power lords explained it? The enemies are insufferable, and the hit detection is paltry at best. Even when he’s equipped with a weapon, like a sword or a gun, the pseudo-3D landscapes can throw off his aim. Time Lord doesn’t use the potential of its boundless time-travel concept, and what is accomplished is half-baked. No time like the present to forget it ever existed.
D
The following two tabs change content below.