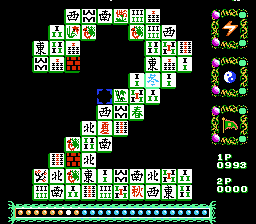 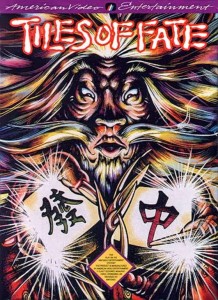 What sorcery is this?

Level 5 is when Tiles of Fate decided to ratchet up the difficulty.

I reviewed Tiles of Fate in September 2012 as part of a fifteen-game multi-cart known as Maxi-15. Let’s see what I had to say:
“Tiles, tiles everywhere, so let’s all have a drink. That’s exactly what I wanted to do after a few rounds of trying to match up tiles with other tiles on this Mahjong-inspired romp. There’s anywhere between six to ten different shapes on the board, and the goal is to match up the tiles on the edge of the board. The ridiculously short time limit and the parameters the game sets in order for tiles to be eliminated make this one crazy hard game. Worth learning, though, if you have the time and booze money set aside. “
The Dylan of October 2013 understands Tiles of Fate a little better. You are supposed to match tiles that bear the same shape, but they don’t have to be on the edge of the board. They just can’t be more than two right turns away from each other. In other words, if you had a square-shaped board, you couldn’t match a tile on the top row with a tile on the bottom row, but you could match a tile on the top with one on the left. You have three power-ups, a flag, a yin-yang symbol, and a lightning bolt. All three of them eliminate pairs of tiles, though the flag selects random ones, while the other two select matching ones. At any rate, playing the game is much less confusing than reading about it. And you should play it. Thanks to its unlicensed nature,Tiles of Fate is one of the unsung puzzle gems of the NES library. Don’t feel bad about downloading it. It was never legal in the first place.
B+
The following two tabs change content below.