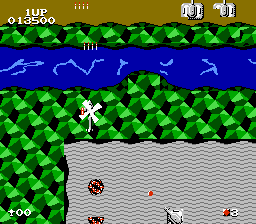 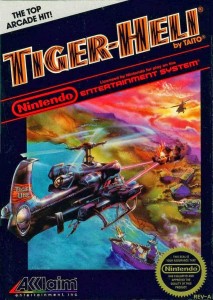 Strangely serene painting for the cover of a shoot-em-up. I blame the sunset.

Tiger-Heli is often confused as Tiger Hell, though the latter is another concept altogether. The game is a vertically-scrolling helicopter shooter that adheres to all 80s shmup Standards & Practices: repeating levels (level 5 is actually level 2, ya dig?), few upgrades (mini-helicopters that side-saddle you), and jarring difficulty leaps and plunges. There are points in Tiger-Heli where you’ll be scanning the horizon for enemies and find none, then five seconds later, you’ll be overcome by six tanks, usually resulting in death. Are these moments of silence followed by moments of intensity really how war is? I wouldn’t doubt it, but it doesn’t make for the most enjoyable shmup experience. If not continuously bombarded in any shmup, one has the tendency to zone out. Laziness, in games and in war, usually results in death, unless lucky; so it is for Tiger-Heli. Shall I tell of the tokens you collect on the battlefield? Collecting ten nabs you an extra life. Try it. Sure as you’re born. What about the imploded pepperoni craters that appear whenever you destroy anything? They make me yearn for pizza, but tell me little about the game itself. Or perhaps, upon realizing that Tiger-Heli might be the most nondescript shooter on the NES, the mention of the pepperoni craters in my review says it all.
C
The following two tabs change content below.