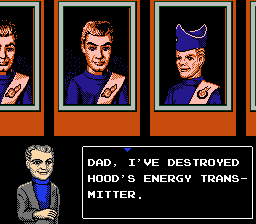 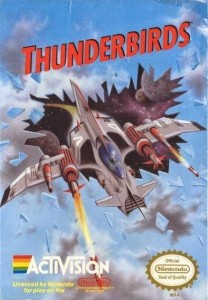 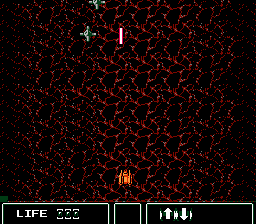 Thunderbird 3, hoping to make it out of Varicose Vein Valley alive.

Creepy British puppets from the 60s have no place in video games, and yet, in the 80s and early 90s, there were a surprising amount of games based on the marionette sci-fi show “Thunderbirds.” Thunderbirds for NES is one of these adaptations, a run-of-the-mill shmup that, thank God, does not thrust dangling devil dolls in your face. Cinematics of the Thunderbirds characters bookend each level, but the gameplay is pure shooter, heavily influenced by the classic Capcom 19XX shooter series. If you’ve played 1942 or 43, Thunderbirds will feel like similar terrain, albeit not as refined. Some enemies look and move identically to those found in 1942, while the power-ups are only slight re-modifications (more bullet power! Mini-planes that hover alongside you and shoot! Etc.!). One difference: you don’t just pilot one plane. Throughout the game, Thunderbirds will give you control of the Thunderbirds five unique vessels. While they all handle more or less the same, some have larger guns, while others are smaller and more likely to avoid projectiles. Switching between ships injects a little variety into this otherwise staid romp around the mod pole. Unlike many genres, I’m a firm believer that you can excrete enjoyment, however little, from any shooter. If you imagine Thunderbirds as 1942 B-Sides and not “Puppets Off To War,” it’s much more tolerable.
C-
The following two tabs change content below.