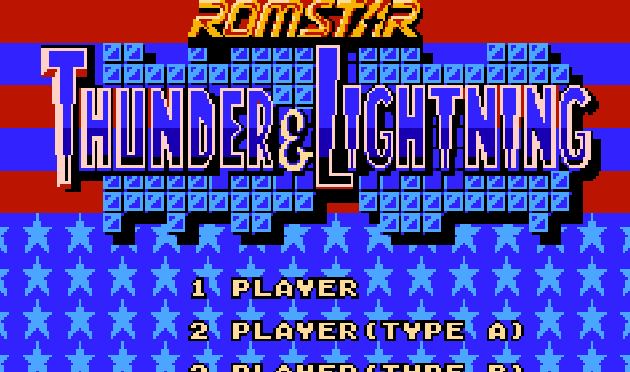 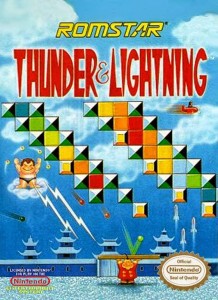 This cover really does cover every aspect of Thunder & Lightning. 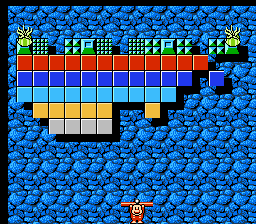 Breakout begat Arkanoid which begat Woody Pop which begat Thunder & Lightning. Breakout‘s children range from “uninspired” to “further degree of crazy,” and Thunder & Lightning certainly falls into the latter camp. Peep this madness: A gourmet food lover named Mr. Chin awakens the Thunderwarrior during his search for the world’s greatest delicacies. As punishment, the Thunderwarrior  commands him to topple the 30 Walls of Regret, with only a stick and Demoe Ball. The simple version is, you play thirty levels of Breakout with a character named Mr. Chin, who mildly resembles Ziggy. But what a story! That’s Clash at Demonhead material right there.
Like any self-respecting seed of Breakout, power-ups can be acquired by hitting tiny vehicles that move along the screen. There’s the standard multi-shot (three and six-way), large ball, slow ball, extend stick, glove/catch ball. What differentiates Thunder from its siblings are the obnoxious (but challenging) interactive elements in the thirty levels. Some levels might only have a few blocks to destroy, but the blocks are surrounded by octopus-spewing vases. When an octopus touches down on your stick, your movement slows considerably, and only a ball to the head can knock the octopus off. The Thunderwarrior himself makes appearances throughout the game, as well. If you hit him, he’ll destroy blocks around him (yay!), but he’ll also shoot down lightning at Mr. Chin, paralyzing him briefly if hit (boo!).
Make no mistake: Thunder & Lightning is (appropriately) balls-to-the-wall difficult. There’s an overwhelming amount of strategy and luck that goes into toppling the 30 walls, but Mr Chin is determined, and above all, hungry. He’ll destroy the Thunderwarrior or starve trying.
B+
The following two tabs change content below.