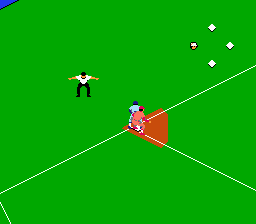 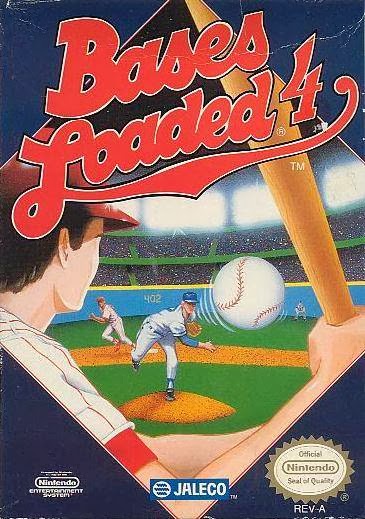 Not only is this the best Bases Loaded yet, it also has the most interesting cover. 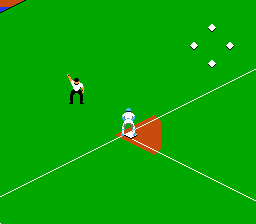 I’m really running out of captions here. It’s all the same crap!

It’s November 1993. You have a SNES, Genesis, and a NES. You are one spoiled kid. You also happen to be a baseball fan and possess Super Bases Loaded for the SNES. For Christmas, your parents purchase you Bases Loaded 4 for the NES, knowing that you love Super Bases Loaded. You are underwhelmed. It’s not that BL 4 is a bad game, but it’s essentially Bases Loaded 3.1. And considering Super Bases Loaded was released the same year as BL 3, there is no point to BL 4‘s existence. And if I never write Bases Loaded or BL again or see another constipated full-sized sprite clutching a bat, it will be all too soon.

Bases Loaded 4 is the best game in the series. Everything that was top-notch about 3 remains excellent here; heck, they even improved the tracking. During field play, there is a smaller map off to the right hand side of the screen that tracks the ball and your fielders’ locations, so you can move them appropriately. Remember in the first game how your large sprites would change to freaky pixel demons when it would switch to field play? No longer. Your sprites are just as large batting and pitching as they are out in the field. Consistency: it’s what’s for breakfast.

Only two Bases Loaded games should have ever been produced for the NES: the original which, for better or worse, introduced some new ideas to the land of NES baseball, and Bases Loaded 4 which brings together the full Bases Loaded package. But to release this as the fourth in the series with little to no change in gameplay, two years after the series made the 16-bit upgrade, is absurd. Well done, Jaleco and TOSE, you magnificent money-grubbing bastards!