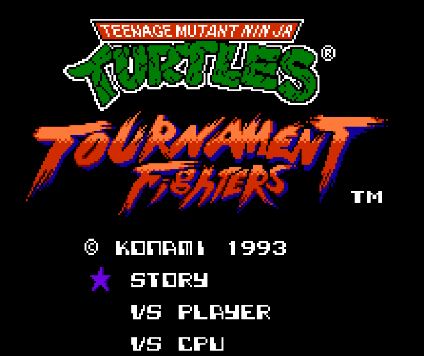 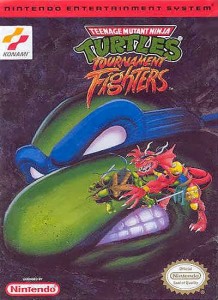 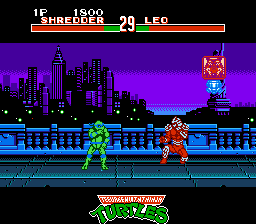 It’s like I’m playing the end of the first movie!

A Turtles fighting game is a brilliant idea, but on the NES? With a controller that only has two buttons and a D-Pad that’s as stiff as the President’s shoulders? Konami probably shouldn’t have bothered, but I’ll give them this: compared to previous fighting game attempts on the system (like Best of the Best or Karate Champ), Tournament Fighters is among the most fulfilling. A variety of modes – Story, VS Player, VS CPU, and Tournament – keep the action alive and well. In Story Mode, you’re forced to play as one of the four Turtles, but in the VS mode, you can play as Shredder (and Casey Jones and Hothead, but c’mon… Shredder). There’s no getting around the stiff controls, but each character’s move list is surprisingly simple to execute. The move list for the characters isn’t Street Fighter II-worthy, but Konami makes the most of the limited buttons – five-to-six moves per Turtle, and four moves per VS. only characters. Learn them well: the A.I. bounces between pushover and menacing, with a healthy portion of jerkface. Tournament Fighters was Konami’s final game for the NES and they spared no expense. The character sprites are large and detailed, the fighting is smooth and fast, and the soundtrack is as intricate as some 16-bit games. If you want to play Tournament Fighters in earnest, pick up an NES Advantage. Otherwise, be prepared to wrestle with the controls, as well as your Turtle brothers.
B-
The following two tabs change content below.