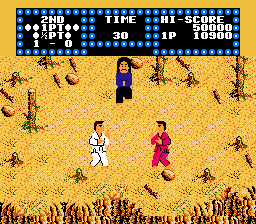 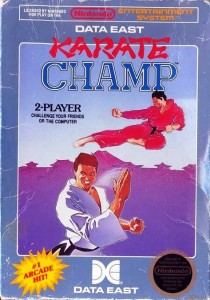 For better or for worse, this image sums up the game. 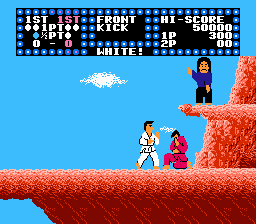 More like Karate Chump, amirite brahs? I don’t care if Karate Champ was one of the first games in the fighting genre, it plays, looks, and smells like rotting potato liquid. You play as White Gi Student and your task is to fight Red Gi Student, all while your disapproving master looks on from above you (“I thought I trained these kids to fight, not flail their limbs akimbo”). While the game tries to play like more of a fighting simulator – think Virtua Fighter for the NES – its ambition is squashed flat by the capabilities of the developers. There are a surprising number of moves you can pull off with just two buttons and a directional pad, but good luck getting any of these moves to knock your opponent out. The collision detection is awful, which for a fighting game, is pretty much the entire point. You want your punches and kicks to land on your opponent’s body. Oftentimes in Karate Champ, it looks like your attacks are connecting, but they don’t register. On the other hand, Red Gi Student can successfully knock you out several times without issue; things that make you go hmmm. Unlike modern fighting games which have life bars, Karate Champ is mildly realistic: one solid hit and you’re down. Two solid hits and the round is over. Two rounds and you either advance because you won or it’s game over. One redeeming aspect is the early use of a garbled, granulated voice saying “Begin!” at the beginning of each round. I’m assuming your sensei’s speaking. He should probably cut back on the opium.
D-
The following two tabs change content below.