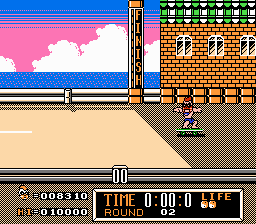 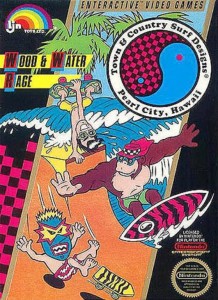 Pearl City, Hawaii must be proud of their legacy. 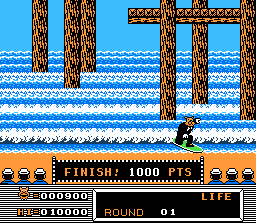 Who wouldn’t want to watch a surfing cat in a blazer?

Before Thrilla Gorilla embarked on his personal “Surfari,” he was competing against Kool Kat (a large feline in a five-figure business suit) for the title of “Most Fashionable Anthropomorphic Surfer” in Wood & Water Rage. Tiki Man and Joe Cool round out the eclectic ensemble, while competing for “Most Disturbing Stereotype” in the “Street Skate Session” portion of the game. These fellows aren’t from any Town or Country you’ve ever been to, but they can ride a mean board.
Skating or surfing: pick your metaphorical rage. In each round of surfing, you’re supposed to ride the wave until you see the pier. Once you see the pier, ride towards it and the round is over. Sounds reasonable enough for any large mammal, but keeping the board on the waves is impossible. You’ll either blast your animal forward onto the beach and off the screen or backwards into the deep ocean. Consult the manual, consult an FAQ, memorize the controls, it doesn’t matter. The waves are stronger than the control input. Skating is far more reasonable. Thrash as fast as you can in each round while performing tricks from your limited repertoire. Jumping with your skateboard is your most valuable move. You can grind on fences, hop over obstacles and pits, or launch off of ramps – all for sweet, nourishing points.
In this humble reviewer dude’s opinion, there isn’t enough content in T&C Surf Designs. Thrilla’s Surfari may have been a suck-fari (two can play at the pun game, LJN), but at least there were twenty-eight stages for you to hate. Wood & Water Rage limits you to too-similar rounds of skating and surfing. Since the latter is a stone-cold drag, be down with land boarding or bust. Totes uncool, brah.
D+
The following two tabs change content below.