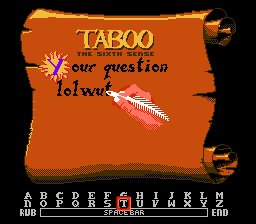 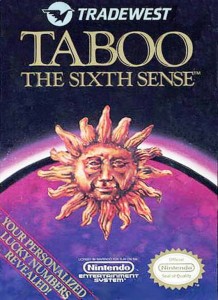 Here was my question… 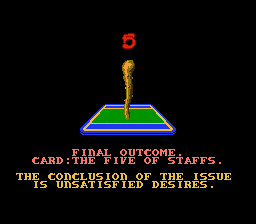 And here was the answer. Taboo sure has my number!

It’ll only take two of your senses to realize that Taboo: The Sixth Sense is up a feces-infested creek sans paddle. As far as I’m aware, this is the one and only tarot card reader/simulator/whatever the hell that’s ever been released for any game system. There’s a reason. Reading tarot cards doesn’t constitute a game. A person with no sense could have told Rare that and spared them the trouble, yet here we are. In Taboo, you provide your name, birthday, and sex, then you ask the 8-bit spirit realm a question. Ten cards are drawn and revealed to the player slowly for effect. Each card has a pretentious title, such as: “Base of the Matter,” “Crowning Fears,” and my favorite “Where One Finds Oneself.” None of the cards will ever say anything relevant to your question. Ever. Throwing a full tarot deck into the air, then picking up a few random cards would yield better results. After you’ve received (and spit upon) the nonsensical answers to your question, you get to choose some Lucky Numbers. Not even the Taboo manual explains the purpose of the Lucky Numbers, so your guess is as good as mine. Put in your state (?), the amount of numbers you want picked, and the range of values for said numbers. The game gives you a set of numbers, then it’s back to the title screen for more, uh… yeah.
F
The following two tabs change content below.