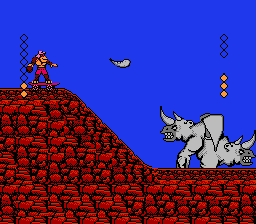 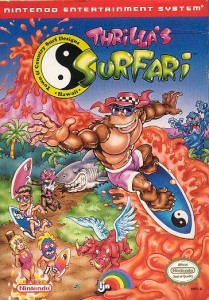 If your child ever asks what the 90s were about….

Without a doubt, one of the most disturbing boss designs on the NES.

T&C Surf Designs presents: surfing, skating, plummeting down a waterfall, riding a shark. Sounds pretty boss, right? Now imagine doing it all as a hip gorilla. If you just exclaimed, “Gorillas? Bro!”, Thrilla’s Surfari will scratch that simian itch. Just don’t pack the coconuts: this trip is all business. Thrilla’s girlfriend, a human (!) named Barbi Bikini, has been stolen by Wazula, an evil witch doctor. Naturally, Thrilla feels incomplete without his better, blonder half, so he flies to Africa to save her. Keeping Thrilla atop his board is the objective in every level, and it’s no monkeying matter. Whether he’s surfing on a river in the jungle or skating through the desert, obstacles abound. Getting knocked off your board is an insta-kill too. So Thrilla can skate, swim, and (since he’s a gorilla) is naturally strong, but he can’t take a few hits of damage? Even Excitebike lets your wee raceman get back up after flipping his bike repeatedly. Surf Designs almost forces you to skate or surf quickly, but for me, taking it slow was the key to moderate success. Even after you feel more comfortable with the game’s pacing, Surf Designs will still reign many deaths upon poor Thrilla. The levels put more and more crap in your way, one-hit kills, no continues. It’s enough to make any gorilla write off additional surfaris – even with their bimbo girlfriend’s well-being at stake.
D
The following two tabs change content below.