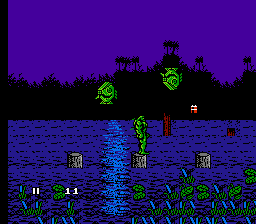 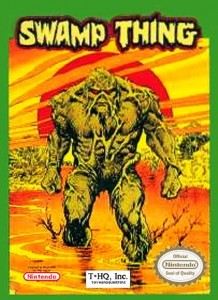 Grumpy old Swamp Thing wakes up from his nap to find kids playing on his swamp. 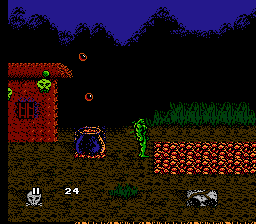 These hot coals are ok to walk across, but step on that bubbling pot and your health will reduce something fierce.

Platforming isn’t just for Normals anymore! Swamp Thing, a former scientist gone rogue plant creature, engages in some good ol’ fashioned left-to-right walkin’ and punchin,’ the way THQ intended. Since Swamp Thing looks like a slightly smaller mucus-encrusted Hulk, it would stand to reason that his power would be either Super Strength or Super Mucus. In Swamp Thing, you can sorta do both, but your main offense is your slippery fists. For whatever reason, your punch will only connect if the enemy is at chest level. Yes, that’s right: Swamp Thing can’t duck and punch. Any creature below your chest (and most of them stay low to the ground, naturally) will have to be jumped over. You can collect a limited amount of sludge to throw at enemies, but you’ll always run out. Running out of swamp sludge makes zero sense. Swamp Thing is made of swamp. He should be able to chuck as much of his body as he wants, any time at any thing. But since he can’t, the best offense is a good defense: punch enemies if you can, but otherwise, avoid their attacks by jumping over them. And that, friends, is sad because Swamp Thing should be as mighty in battle as he is in swamp run-off. In summation, Swamp Thing is a repetitive platforming affair, offering negligible combat, tedious amounts of leaping, and re-used Bart Vs. The Space Mutants sound effects (both games were made by Imagineering). Keep this buried deep in the bayou where it belongs.
D
The following two tabs change content below.