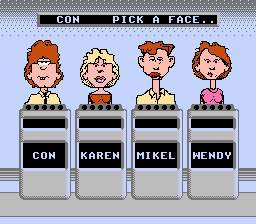 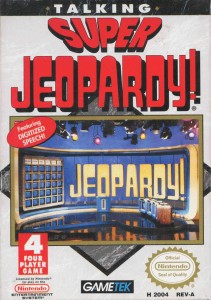 Gametek’s obsession with freaky sprite work continues in Super Jeopardy!. It’s the last of Gametek’s quad-fecta of Jeopardy! games on the Nintendo and the first to have digitized speech, if that’s your thing. The announcer’s voice is surprisingly clear, though it sounds nothing like Alex Trebek. Would it have broken Gametek’s budget to get a soundalike? Speech aside, Super Jeopardy! is Jeopardy as usual. Pick a character, answer questions, get more points than the other players, and win the game. The questions are as dated one would expect, though unlike the previous Jeopardy! games, they have less to do with pop culture and more with obscure facts. Did you know that, in 1984, 1,080 men had voluntary vasectomies to support the King of Thailand? Neither did I! This is but one of many odd questions you’ll come across. Again, unlike the previous games, the computer characters show considerable intelligence. If you don’t buzz in, some one else will and they will likely get it right. As always, it’s better to cut the computer off completely and play game show games with real people. Super Jeopardy! supports up to four players and it sells for about a dollar used. In other words, you have no reason not to bust this out at your next soiree.
C
The following two tabs change content below.