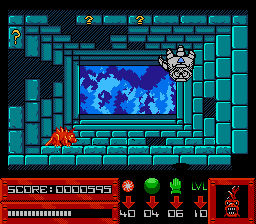 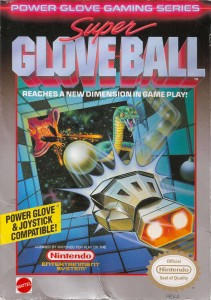 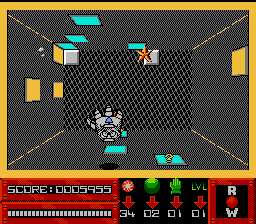 Super Glove Ball was designed to be played with the Mattel Power Glove. Even in 1990, this seems insane. Sure, the Power Glove had a great marketing campaign, (look at how tubular this kid looks), but any gamer who tried to use the Glove as a controller could tell you that the device was unwieldy. Why play a game on a glove when you could use a comfortable controller? Did Rare actually think the Power Glove would be a hit, or were they short on their monthly game-making quota?
In any case, Super Glove Ball looks and plays like a pseudo-3D version of Arkanoid with enemies thrown in. You start off in a tiled room inside a large maze. Each room has four tiled walls, and thus four ways out. You have five balls to help you bust through the tiles. Bounce the balls off your glove continuously or catch them and release them in another direction. Just don’t let them disappear: if you lose all five balls, you lose a life. Once a wall in any direction is free of tiles, move the Glove towards the wall, enter the next room, and the tile-destroying cycle begins anew. Enemies will come and go throughout the middle of the room. The balls will typically take them out, but that doesn’t make their inclusion any less frustrating.
Playing Super Glove Ball on a controller was boring, though I can’t see how playing “the right way” by strapping an uncomfortable rubbery glove onto your hand would make the game sparkle. At best, it’s a tech demo, Rare out to lunch. At worst, it’s one of two games tailor made for the most overhyped NES peripheral ever. To borrow a phrase from a gaming personality, what were they thinking?!
D-
The following two tabs change content below.